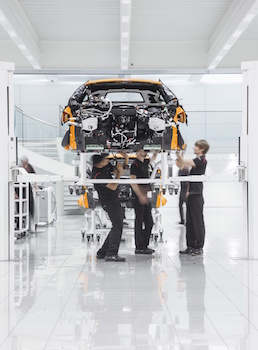 UK – The carmaker has launched a three-year NVQ Level 3 programme, initially with an intake of 15 students but with potential for an increase at a later date. McLaren Automotive’s first engineering apprenticeship scheme, introduced one year earlier than scheduled, complements existing graduate and work-placement programmes.“Since McLaren Automotive launched its first product in 2011, we’ve created significant success by building some of the world’s finest sports and supercars,” commented Mike Flewitt, the carmaker’s CEO. “But to create these cars, we have also built a strong team of committed, competent and passionate people. And key to the future success of the company is recruiting young, talented and highly motivated engineers, and an important part of that is apprenticeships."The apprenticeship scheme will focus on production engineering and see the students gaining hands-on experience at the McLaren Production Centre at Woking, UK, under the supervision of technicians. Apprentices will learn about vehicle assembly techniques, fabrication and machine tools, plus data interpretation, problem-solving and process documentation. The students will also complete work at local colleges to gain an NVQ Level 3 in Automotive Engineering.

The carmaker is additionally exploring the possibility of apprenticeships within the Product Development department at the McLaren Technology Centre, also in Woking.