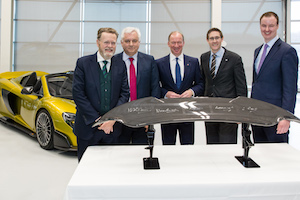 UK – The Composites Technology Centre in Sheffield will develop and manufacture the Monocell and Moncage carbon-fibre chassis in future McLaren cars. Construction work will begin in early 2017 and full production is scheduled for 2020. Meanwhile, pre-production chassis will be completed using trial processes at the nearby Advanced Manufacturing Research Centre (AMRC) at the University of Sheffield.

McLaren’s first purpose-built facility outside its Woking campus will cover 7,000 sq.m over four areas and will have a 200-strong workforce, including 150 production workers and 50 manufacturing support personnel. It is being established in partnership with the AMRC and Sheffield City Council and represents a combined investment of £50m ($62.1m). McLaren estimates that insourcing carbon-fibre chassis production will deliver savings of £10m for the company as well as £100m of gross value added benefit for the local economy by 2028, potentially rising to £200m with further expansions. The average percentage of a McLaren car, by value, which is sourced in the UK will increase by eight points from the current 50%.

McLaren started exploring the use of carbon fibre more than three decades ago and introduced its MP4/1 with carbon-fibre chassis to Formula One. The AMRC began in 2001 as a £15m collaboration between the University of Sheffield and Boeing, before adding in 2008 the Rolls-Royce Factory of the Future, which was expanded in 2012 to include a larger composites facility. In 2015, the AMRC’s Factory 2050 was launched as a fully reconfigurable assembly and component production centre for collaborative research, with the ability to switch rapidly between different high-value and one-off parts.