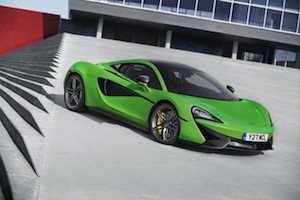 UK – The first car in the new family being made at the McLaren Production Centre (MPC) in Woking is the 570S Coupé, which will be followed by the 540C Coupé and an additional, undisclosed bodystyle in 2016. The first 570S Coupé which rolled off the line has been delivered to a UK retailer.

McLaren said the start of production for the Sports Series “heralds a new chapter” in the company’s history and fulfils its three-tier product strategy: Ultimate Series, Super Series and Sports Series. The OEM expects the Sports Series family, which will be complete by 2018, to more than double its annual volume to over 4,000 cars. McLaren’s global retailer network already holds around 1,000 orders for the 570S Coupé.

“In our short history, we have produced a range of supercars and hypercars targeted at a core, enthusiast buyer,” commented Jolyon Nash, executive director – Sales and Marketing, McLaren. “The Sports Series is targeted towards a new buyer and opens McLaren up to the sports car market that we have not served to date.” He said the new family would “make a significant contribution to the long-term sustainability of the company”.