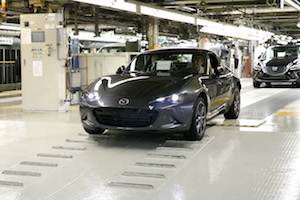 Japan – The MX-5 RF, featuring a retractable hardtop, is being produced at Ujina Plant No.1 near the company’s global headquarters in Hiroshima. Production began with models for the European and North American markets, where sales will start in early 2017. In Japan, the MX-5 RF will go on sale later this year.

This latest version of the lightweight two-seater features a fastback design with a three-piece power retractable roof that, when opened, leaves the rear buttressed section in place.