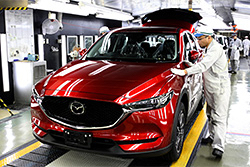 Japan – The crossover SUV is now being made at Ujina Plant No.2 near the company’s headquarters in Hiroshima. The CX-5 will go on sale in Japan in February before being rolled out to global markets.

The original CX-5 entered production in November 2011, debuting Mazda’s SkyActiv technology and Kodo design; SkyActiv covers next-generation features across the engine, transmission, body and chassis. In April 2015, cumulative production of the CX-5 reached 1m units, making it the second-fastest model to hit this milestone after the Mazda3 (the Axela in Japan). Total output had reached 1.57m units by the end of October this year.

According to Mazda, global sales of the CX-5 have increased every year since launch and the model now accounts for about 25% of its total sales.