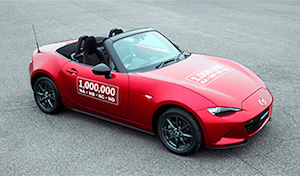 Japan – The milestone was reached on April 22, after 27 years of mass production at Ujina Plant No.1 in Hiroshima. Mazda is currently making the fourth generation of the model, known as the Roadster in Japan.

The fourth-generation MX-5 launched in September 2014. The one-millionth unit will be displayed in Japan and around the world.