Marc Nassif hands over to Sumit Sawhney at Renault India

As Renault’s president and CEO in India hands over to his successor, AMS gets the inside track

In little more than 30 months, Renault has transformed itself from a non-entity in the vast but largely untapped Indian market to one of the top ten automotive companies in the region. It has done so by restructuring its management, manufacturing, product line-up and approach to the needs of Indian car buyers.

The company is now the leading European player in India and has realistic ambitions to become even bigger. From a base of just 1,500 sales in 2011, it has grown to 64,000 units in 2013 for a 2.6% market share. Renault currently offers five modern, attractive cars in India and will introduce a sixth in 2015.

And while the Indian car market is currently in decline, in common with the national economy, forecasters believe it has the potential to become the third largest in the world behind only China and the US by the end of the decade. Estimations for the total industry volume by 2020 range between 6 and 9 million a year – of which Renault has targeted a 5% share.

The man who initiated this remarkable turnaround is Marc Nassif, who was president and CEO of Renault India for eight years before he handed over to Sumit Sawhney on the eve of the Delhi Auto Expo at the beginning of February.
It was Nassif who oversaw the dissolution of the previous ill-fated partnership with Mahindra in 2010 and masterminded the plan for Renault to go it alone in the sub-continent.

Nassif's rescue mission
“We decided to go to India in 2005 and have been involved here since 2006,” says Nassif. “In 2007 we launched Logan, but then sales started to decline. The partnership was at an impasse and we decided that if we wanted to be a strong brand in India we would have to go solo. [sam_ad id=17 codes='true']
“In 2009 we were in turmoil. We had to examine how we were going to revive India. In 2010 we came up with a plan which involved the end of the relationship with Mahindra. We handed Logan over to Mahindra and set about trying to achieve best-in-class quality and ride and handling while introducing good diesels. Our relationship with Mahindra had helped us to learn a lot about the market, customers, supply base and manufacturing here.”

Unusually, Renault shares much of its Indian operations with Alliance partners Nissan and, since the start of February, Datsun. Everywhere else in the world the two major partners in the Alliance operate independently.

But in India they have a shared technical centre in Chennai, which opened in 2008, and a $1.3 billion joint manufacturing and powertrain facility nearby which was inaugurated in 2010. Renault also has design centres in Mumbai and Chennai, sales offices in Chennai and Delhi and logistics hubs in Pune and Chennai. The company has expanded its sales outlets from just 14 in mid-2011 to 125 at the end of last year, with a target of 175 sooner rather than later.

“In 2009 we were in turmoil. We had to examine how we were going to revive India" – Marc Nassif, Renault-NissanCapacity at the Chennai plant was increased from 400,000 per year to 480,000 recently, and though output is predicted to be around 300,000 in 2014, the re-introduction of Datsun and the extra Renault model will mean the slack is taken up in the coming years.

Renault currently offers five locally made models in India: the Fluence and Scala saloons, the Duster and Koleos SUVs and a small hatchback based on the Nissan Micra and sold as the Pulse. The Duster has become India’s top-selling SUV in just 18 months. 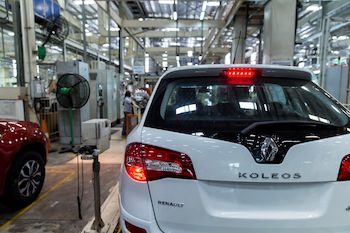 Nassif says Renault started with a “top down” approach to its Indian line-up, which means that its current cheapest offering sells for the equivalent of €5,000 ($6,800), while the critical mass in the market is the €3,500 price band. That will change in 2015 when Renault rolls out its first model based on the Alliance’s new cost-saving, parts-sharing Common Module Family architecture (CMF-A).

The new car will be an A-segment model built to the Alliance’s ‘frugal engineering’ philosophy for developing markets. It will also be the first new Renault for India under the stewardship of Sumit Sawhney, who joined the company 18 months ago after a long career with General Motors.

Passing the baton to Sawhney
Nassif’s successor is the first local to lead Renault India, and this can be taken as evidence of the increasing internationalisation of the company – sales outside Europe now exceed those within it – plus a statement of intent towards the Indian market. Sawhney also brings a local’s insight into the potential and problems posed by India, which has a population of 1.2 billion (half of whom are aged under 25), the third-largest and fastest-growing middle class in the world, and a demographic in which seven out of 10 people are still rurally based.

India is full of paradoxes. “There are 29 states, 30 languages and 2,000 dialects,” says Sawhney. “When Indians buy something they talk about it being an investment rather than a cost. Indians demand the latest, but they are still rooted in tradition. They will accept modernity, but they want it to be the best.”

The new-car sales slump of 7.5% in 2013 was reflected in other retail areas and is “nothing to worry about”, in Sawhney’s opinion. He expects growth to return once the national elections have taken place later this year.

India doubles taxes on new cars more than 4m long, yet practicality is still extremely important to buyers – a conflict which has resulted in many ungainly-looking and top-heavy small cars dominating sales. Sawhney believes that with its long tradition in design, Renault is in a strong position to capitalise on the situation.

“The brand represents access to premium-ness,” he says. “We will be emphasising our technologies and also our degree of localisation – for the Duster we made 30 changes for the Indian market. Once we get the new mini-car we will cover more than 75% of the segments in the Indian market, and we will continue exploring other segments. Given the success of the Duster, another SUV would be very interesting for us.”