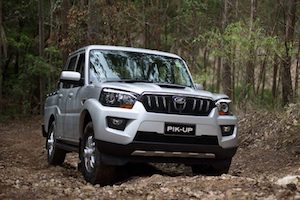 South Africa - The company has opened a new vehicle assembly plant in Durban - a coastal city located in the KwaZulu-Natal province. Costing 10m rand (US$790,000), it will be used to build a range of single- and double-cab pick-ups, demand for which is currently rising across the country.

"Mahindra has grown significantly since the launch of its first models in South Africa," observed Rajesh Gupta, CEO of Mahindra South Africa. "In the last five years alone, it has grown its market share by a compound annual growth rate of over 4.6% a year, which puts us in a league of the five fastest growing companies in the same period. Much of this growth was achieved in a declining market, which indicates our increased acceptance and popularity in the South Africa market."

The facility will have an annual capacity of 2,500 units at first, running a single shift. However, Mahindra says that this figure could be almost doubled if needed. Other models may also be made at the plant.

"Our focus is on the bakkie segment, where Mahindra is now one of the six best-selling bakkie brands in South Africa. We will start with the assembly of the Mahindra Pik Up range, but this does not mean that we could not, in future, add another pick-up or commercial vehicle or even one of our tractor models or heavy-duty power generator systems to the assembly line," commented Avinash Bapat, chief financial officer of Mahindra South Africa.

Construction of the plant was part of a partnership between the OEM and Dube Tradeport - an economic zone that is controlled by the Department of Trade and Industry (DTI) and was set up in order to promote local and international trade. It is the first assembly facility to come with this association.

Mahindra also recently announced that it had established a joint venture with Ideal Motors - a Sri Lankan carmaker - in order to expand its presence in Asia. The two are currently building a plant in Kalutara.