From NY to KL, cities all over the world are jumping on BYD’s electric bus

It looks like any of the other thousands of red double-decker buses proceeding through the loud traffic on London’s streets, but if you listen closely you’ll soon realise that some buses are different. Instead of the usual engine rumbling, all you can hear is a high-pitched hum. Indeed, it is the world’s first double-decker bus designed to run on electricity. It is part of a plan to improve air quality in the UK capital. More and more cities around the globe share London’s dream of zero-emissions local transportation and are switching to environment-friendly electric buses. One of BYD’s strengths of is its in-house expertise in high-performance batteries aided by the laser technology used to weld their highly sensitive components.

The future promise of electromobilityChinese company BYD has taken advantage of this electric trend and is driving it forward. The three letters making up the company’s name are indicative of its great ambitions – they stand for “build your dreams.” In 2015, BYD sold 7,500 electric buses to cities around the globe – more than any other manufacturer. No less than 160 municipalities in 40 countries have run trials of the different variants of BYD’s electric bus, including New York, Tel Aviv, Montevideo, Kuala Lumpur and now London. Electromobility is the way forward to a greener future. Electric motors do not produce harmful CO2 emissions and are much more efficient than internal combustion engines: a gasoline-powered vehicle converts only 19% of the energy it consumes into motion, whereas electric vehicles have a conversion efficiency of 64%.

An optics design in a TruDisk laser by Trumpf

Made in AsiaThousands of kilometres away, in the south-east Chinese city of Huizhou, Liu Huaping, BYD’s process department manager shows visitors around the plant where BYD manufactures the batteries for its electric buses – one of three such sites. “The batteries are the core components of our vehicles; they determine how far the buses can travel. They have to be able to store as much energy as possible without being too bulky or heavy,” says Huaping.

When designing electric vehicles, the biggest challenge is not the engine but storage battery. One of the reasons for BYD’s success as a manufacturer of electric buses is that the company was able to build on its reputation in the battery industry. BYD began producing rechargeable batteries in 1995, but didn’t turn its full attention to the automotive industry until 2003. Almost every single component is manufactured by BYD in house: from the electric motor to the steering wheel and the fenders.

The company grew rapidly and soon joined the ranks of China’s largest car-makers. Buses were finally added to its portfolio in 2009. BYD developed its own iron phosphate battery for these vehicles. Iron phosphate batteries are safer than the more common lithium-ion batteries because they are not susceptible to the thermal runaway phenomenon, which can cause the latter to catch fire or explode. The batteries developed by BYD are also kinder to the environment because they are recyclable and don’t contain any heavy metals. Efficient and reliable production processes are the key to meeting the growing demand for these energy-storage devices, while ensuring quick delivery and affordable prices. “Welding plays a significant role in the battery manufacturing process.

"We use pulsed lasers to seal our battery enclosures because the weld seams have to be absolutely gastight. This process must not generate too much heat because this could damage the internal components of the battery" - Liu Huaping, BYD

Among other things, it is used to attach the connectors and to seal the battery enclosure,” explains Huaoping. BYD uses different techniques depending on their suitability for a particular type of welding job. They include resistance welding, ultrasonic welding and electron-beam welding. “But laser welding is our method of choice for applications requiring a high degree of precision,” says Huaping. A glance at the factory’s fleet of machines shows how important lasers are in the company’s manufacturing processes.

BYD has installed a total of 120 Trumpf laser machines in its battery plant: 70 from the TruDisk series and 50 from the TruPulse series. Huaping illustrates this point by fanning out three thin strips of metal: “The majority of our welding operations involve part thicknesses of no more than two millimetres or even less. These parts are made of copper, aluminium or an aluminium alloy.” 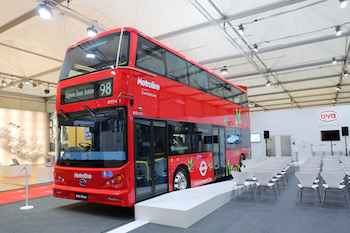 London is one of 160 municipalities in 40 countries have run trials of BYD’s electric bus (above and top image credit: BYD)

So as not to damage the sensitive battery components, the welding process must have the least possible impact on the surrounding material. “Fine weld seams, low heat diffusion, low intrinsic stress and minimal distortion are our key requirements for such processes,” says Huaping as he walks toward a TruDisk laser machine. Disk lasers are ideally suited for welding highly reflective materials such as copper or aluminium. The connections between each battery cell and the next are welded this way.

“By adjusting the focus of the laser beam, we can rapidly move from one weld point to the next. We can also adapt the working angle to avoid damage to the optics,” explains Huaping, who is meanwhile walking toward a TruPulse system. “We use pulsed lasers to seal our battery enclosures because the weld seams have to be absolutely gastight. This process must not generate too much heat because this could damage the internal components of the battery.” The chosen method fits the bill because it allows time for the material to cool down between successive laser pulses.

Running for 250 kilometres Meanwhile back in London, a double-decker bus returns to the depot and recharges its batteries after 250 kilometres on the road. A fully charged battery can easily cover this distance, and the bus will be ready to go again after it has been plugged in for four hours. It won’t be the last electric bus operating in the city: London Transport plans to integrate 300 electric buses into its fleet by 2020.