As cutting tools, lasers can now process 3D components so quickly that machine operators are being left behind – but Hujer Lasertechnik is still keeping pace

Collecting components to place in the machine
When Erhard Hujer founded Hujer Lasertechnik GmbH in 1994, 3D laser processing was still a niche market. At the time, companies made their money with 2D processing technologies – but this didn’t stop the entrepreneur from working on 3D laser applications at a very early stage. He recognised the technology’s huge potential, particularly in the automotive industry.

It may have taken a few years, but he has since been proven right. It was 2005 that marked the start of the boom years. That’s when Volkswagen first began using hot-formed components on a large scale for the body of its VW Passat. Press-hardened steel really came into its own, and nowadays more and more components such as A- and B-pillars, sills, roof frames and centre tunnels made of these materials can be found on the world’s roads. The advent of this technology was accompanied by the rapid growth of the 3D laser cutting industry – with Hujer Lasertechnik at the forefront.

Peter Ducat, head of sales and project manager, confirms this: “Ever since the automotive industry started using hot-formed parts, lasers have been booming.” The reason is that, once they have been moulded, these components are so hard that lasers offer the only way to process them economically. Hujer Lasertechnik, which has a workforce of some 200 employees, now processes both 2D and 3D components for the automotive industry as well as for household appliances, agricultural machinery, doors and windows at a total of four sites in Germany: Harsewinkel, Lohfelden, Drolshagen and, since the beginning of the year, Iserlohn. 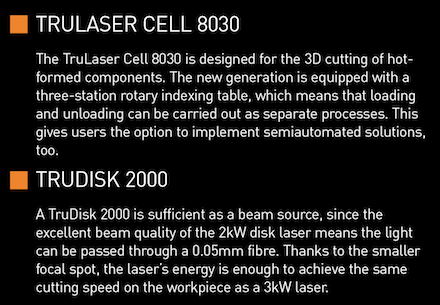 “Nonetheless, we do 80% of our business with car manufacturers,” says Ducat. And these customers require enormous batch sizes – at low cost, with quick turnaround times and high quality. “We process 300,000 to 400,000 copies of each part annually,” says Ducat to describe the scale of operations. One way to handle such vast quantities is to use faster and faster laser machines – but these are now so fast that machine operators struggle to keep up with the rate of production. “As cycle times get shorter and shorter, one employee is no longer enough to cope with loading and unloading the machine while simultaneously carrying out quality assurance,” Ducat explains. Hujer Lasertechnik thus had to find a solution if it wanted to increase its output. Automation was the next logical next step, but even robots have their limits.

First man, then machine
Hujer Lasertechnik tried a new tack – the results of which can now be seen at the factory in Lohfelden: “Some of the components are still warm when they’re stacked, so as they cool, they contract and get wedged together,” says plant manager Ralph Frey. That’s why it’s so difficult to automate this first step – a robot is unable to separate the parts. Often the components even arrive in bulk, which is too challenging for a robot to handle, as it doesn’t know precisely how the particular workpiece is positioned in the pile. Now the operator inserts the B-pillar into the machine. His job is to load the machine and monitor the process; the rest is done by the machine itself and a robotic assistant. While the operator prepares the next component and the laser cuts the part currently being worked on, the robot places the previously cut part in a special frame on the other side of the machine. 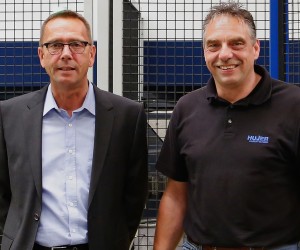 Huger Lasertechnik's Peter Ducat (left) and Ralph Frey (all photos by Andreas Schwiederski)
High speed step by step
This division of labour is made possible by the TruLaser Cell 8030’s most important new feature: its rotary indexing table with three stations. In combination with the laser’s high processing speed, this ensures that, depending on the part in question, the second generation of the TruLaser Cell 8030 can get through some 600 components per shift at Hujer Lasertechnik. Depending on the number of contours, the length of the cut and the associated cutting time, it is theoretically possible for the machinery to process as many as 1,350 parts per shift.

Thanks to the TruLaser Cell’s standardised interface, the laser experts were able to integrate their semi-automated solution quickly and easily.

Full speed using half the power
The usual set-up for this machine and this application is to use a 3kW laser as the beam source and to run the light through a 0.1mm fibre. Hujer Lasertechnik, however, uses a TruDisk 2000 disk laser with just 2kW of power, and transfers the light using a 0.05mm fibre. 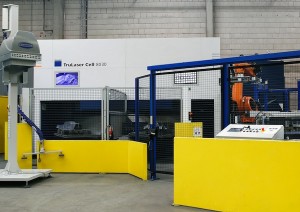 The TruLaser Cell 8030 from Trumpf
This results in a much smaller focal spot that concentrates the laser’s energy and makes it more efficient, with the added benefit that the process is even less susceptible to external factors. Given that it heats and melts less material, the laser can achieve the same cutting speeds as a 3kW laser while expending less energy on the workpiece. “The quality of the TruDisk 2000 beam is twice as high, and we deliberately apply it in a way that gives us huge power savings,” Frey explains. And that’s why Hujer Lasertechnology has already commissioned two more machines of the latest generation for the new plant in Iserlohn. “Each new generation of vehicles that gets on the market has a higher proportion of components made using hot-forming processes. Demand for cost-effective laser processing thus also continues to rise,” Frey states.

Ducat is also convinced: “The process for laser-cutting 3D components will become more and more automated. In my opinion, we’ve not yet exhausted the laser’s full potential – the automotive industry might become even more innovative, particularly in terms of materials.” With its 3D laser-processing expertise, Hujer Lasertechnik couldn’t be better prepared.