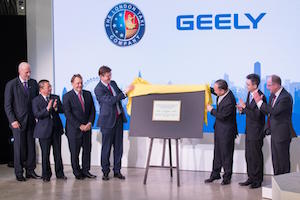 UK – Following the official launch of its new facility at Antsy, Coventry, London Taxi Company (LTC) said that a range-extended light commercial vehicle would be the second vehicle to roll off the line after an electric taxi. An additional £25m ($31.5m) from parent company Geely brings the total investment to £325m.Carl-Peter Forster, chairman of LTC, described the project as “a transformative step” for the company because “we will move from a single-product, single-market organisation to a multi-product, multi-market organisation”. He added: “We remain absolutely committed to designing and manufacturing dedicated, range-extended EVs [electric vehicles] that build upon our deep knowledge of advanced technologies and the needs of the urban commercial sector.”

Zhou Jianqan, head of the Commercial Vehicle Division at Geely, said: “The light commercial van sector in cities across the globe holds enormous potential and urban leaders are embracing zero emissions at an incredibly rapid pace.” He said the new vehicle would “complement Geely’s global expertise in electric vehicle technology”.

LTC’s R&D team of around 200 people developed the van on the same platform as its electric taxi and the new facility at Antsy will be able to flexibly manufacture the two models.