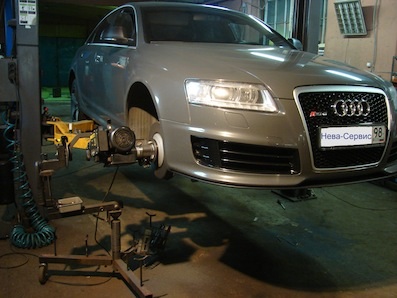 Audi has invested approximately €300m to upgrade a former Volkswagen plant for production of the new A1 premium small car.

The first plant on the current site of what is now known as Audi Brussels was called Anciens Etablissements D’leteren Frères, the name referring to the carriage company started by Joseph-Jean D’leteren in 1805. The first model to enter series production at the plant in 1954 was the Volkswagen Beetle, 1.1 million examples of which were manufactured over the next 20 years.

In 1970, the plant was taken over by Volkswagen AG, which after a programme of modernization, went on to produce a 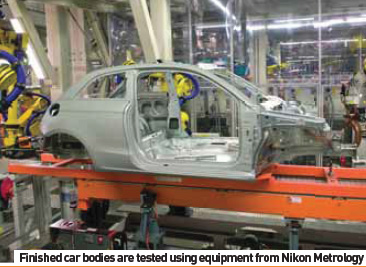 further 6.5m cars. After Volkswagen production had ended in 2006, and following a restructuring of the group, the Brussels plant was handed over to Audi. Renamed Audi Brussels, the plant was set up to produce the A3 Sportback and VW Polo, before being handed sole responsibility for production of the new A1 premium small car. Alfons Dintner, General Manager of Technology and Logistics and also management spokesman for the plant, explains the underlying reasons behind the selection of this facility, located south-west of Brussels in the town of Vorst (Forest), for production of the new small car. “The Brussels facility has a long tradition of building compact cars for the Volkswagen Group. The site has the capacity we need, the infrastructure, in terms of paintshops, bodyshops and assembly lines, and 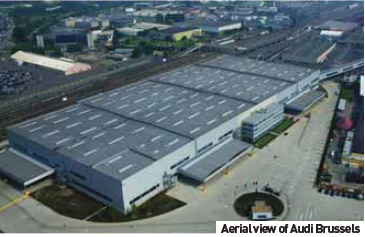 also the manufacturing expertise, gained over 60 years of automotive production. This is also supported by an excellent logistics network.” Located in a region locally referred to as ‘Automotive Valley’, the Brussels plant is situated adjacent to the Automotive Park logistics and supply centre. Opened in 2006, the supplier park features direct links to the Brussels assembly halls for delivery of parts and materials.

Preparing for production
Months before it was available for public consumption, Audi dealers were reporting that interest in the A1 was exceeding expectations. As the first cars rolled off the line, more than 150,000 prospective customers had registered to receive information about the new model. Audi had initially planned for annual volumes of approximately 100,000 units, with distribution limited to European markets. However, supported by the level of global interest, the carmaker is now planning to increase annual output by 20% and extend distribution to markets in South America and the Asia- Pacific region by early 2011. China is also likely to take delivery of some cars, though the date for this has yet to be finalized. Audi states that up to 50,000 units are likely to be built in Brussels by the end of this year. 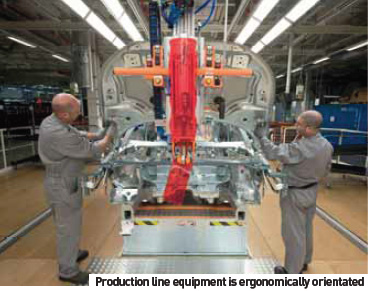 The Brussels plant had been producing the Audi A3 Sportback and Volkswagen Polo until it was decided to dedicate the plant to A1 production. What level of retooling was needed in order to build the new model? “It was necessary to tailor the body and paint shops to suit the new car’s requirements, and also to restructure the assembly lines,” says Dintner. “A new pre-production centre dedicated to the analysis and development of production systems has also been integrated.” He goes on to explain the employee breakdown at the plant. “We currently have a total of 2,650 personnel, of which 400 are office based, 1,600 are factory floor workers and 450 are temporary staff. Production currently operates through two shifts. We started by increasing the capacity weekly, with a target of achieving a total of 518 cars a day by September.”

While the plant was one of the first to use Audi’s ‘turntable’ concept, implemented with production of the A3 Sportback and designed to facilitate volume production across several different sites, Dintner says the first step in preparing for A1 production was to launch a series of intensive education and training programmes to familiarize the various teams at Brussels with the new Audi Production System (APS). Already in place at the German Audi facilities in Ingolstadt and Neckarsulm, and in Györ, Hungary, the system is key to supporting lean production practises. Integral to the APS are the quality analysis and on-going build process optimizations carried out at the new start-up, test and analysis centre - built at a cost of €10 million – designed to ensure sustainable finished vehicle quality.

“A total of more than 500 robots have been installed in the bodyshop, which are primarily used to join body panels,” saysDintner. “The quality of the weld points – particularly in those areas where hot-shaped, higher-strength steels are used – is 100% tested ultrasonically at every build station. Two robot manufacturers supply the Brussels plant, Fanuc and Kuka Robotics.”

There are 12 measurement installations, in addition to 267 handling geometric grippers. Using optical 3D instruments, they test 370 points on the body and over 100 bolt-on components during the production sequence for dimensional accuracy. “Audi does not tolerate any inaccuracies, not even one tenth of a millimetre,” says Dintner.

Measurement testing
Body inspection is carried out using laser scanning technology from Nikon Metrology, with quality assurance engineers using LC60D laser scanners for automatic flush and gap verification. The investment in the innovative metrology technology was made to improve the passthrough rates offered by more traditional tactile scanning or manual calliper measurement. The automatic, non-contact inspection, which is carried out at very high point rates, is suitable for both final body inspection and gap and flush measurement.

Nikon Metrology’s Renaat Van Cauter explains more about the technology now in place on the A1 production line. “The efficiency levels of digital scanners makes them a valid alternative to manual callipers. They can be programmed in advance using CAD data to capture higher-density data in critical surface areas. As Nikon Metrology laser scanners dynamically adapt laser beam intensity point by point, they are able to digitize surfaces with varying colour, high reflectivity or with abrupt transitions, all under any lighting conditions. Intelligent software functions using edge detection algorithms can locate the extremes of sheet metal edges inbetween mated body parts in order to correctly measure the gap and step.”

Upon completion of the scanning process, the geometry of the entire vehicle body, including gaps between doors, fenders and other panels, is stored in digital point cloud format. The digital inspection data of each BIW frame remains available for any type of analysis, while also serving as a reference for later product measurement or vehicle design updates. “An important advantage of the selected scanners is that they can be retrofitted on an existing dual-arm CMM installation, which requires a reduced amount of capital, while maximising the return on investment.”

Alfons Dintner adds that the new robots have also made for a much more pleasant working environment. “They just hum a quiet melody and chirp on occasion. There is no comparison to the loud whooshing and banging of the old robots. The new ones are also much faster and use significantly less energy.” 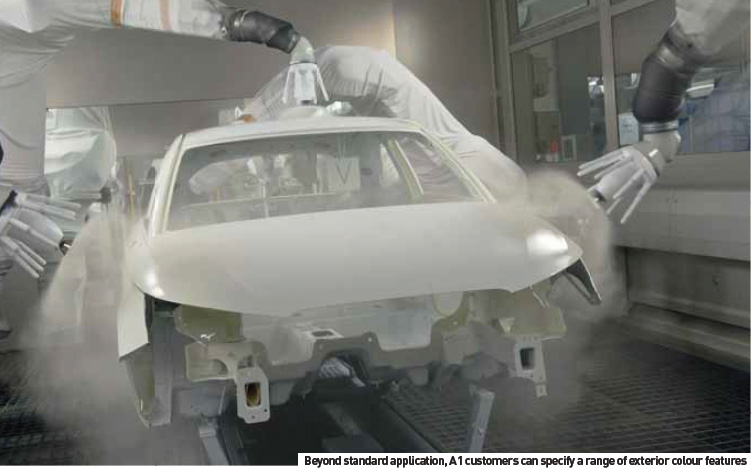 Quality product
The message on a board in the Audi training centre reads ‘Quality is when the customer returns, not the product’. This, says Dintner, could serve as a motto for the entire factory. “With production of the A1, we are giving the Brussels plant the opportunity to develop its own future. Also, this is an opportunity to transfer the Audi premium standard to the compact class through high-precision manufacturing.” He stresses that the entire plant is absolutely focused on quality, an example of which is the innovative plasmatron brazing at the water drain around the luggage compartment opening. “The rear hatch and the rain gutters on the roof are laser welded and brazed for superior strength and appearance.”

Like the welding shop, the assembly line has also undergone a full revision. “We have shortened the line from 179 to 139 work cycles. Audi shortened the timing of the A3 Sportback previously produced here to a rate of 98 seconds. Smaller stores and bunkers, shorter control loops and shorter distances – these are the basic requirements for the lean, future-oriented Audi Production System.”

A non-slip wooden floor and a series of smart ergonomic solutions are also evident. For instance, bodies on the line pass through the assembly steps at the optimal ergonomic height to reduce any unnecessary movements by the production line teams. In addition, specially designed, power-adjustable jigs make it possible to rotate cockpits to a suitable work angle. For subsequent part installation, Audi has developed an ergonomic chair from which the worker can make the engine-side bolted connections.

“The workers on the line receive their materials via the shortest possible distance from the parts supermarket, with just-in-time delivery and replenishing of the shopping cart with required materials. Instead of forklifts, a small tractor is employed to bring trailers loaded with car parts to the lineside racks. It’s both flexible and safe.” Dintner adds that the line is supplied with petrol and diesel engines delivered from Volkswagen Group plants in Germany and Hungary. Upstream of production is the plant’s start-up, test and analysis centre. “Quality checks are the domain of the auditors, each of which are absolutely uncompromising in their search for even the slightest of irregularities,” says Dintner. “Specialists from the pre-production centre were present as the very first pre-production models were progressing down the line. They are organized into expert teams comprising both Belgian and German employees.” 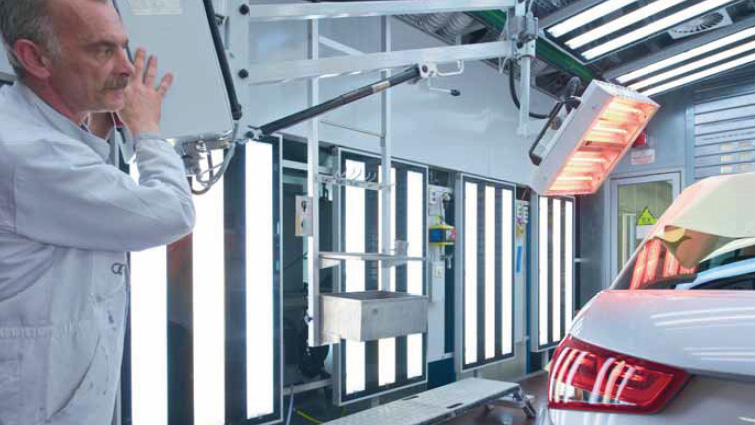 Specification details
The Audi A1 offers customers a wide range of customization possibilities; there are more than 800 different exterior versions and colour combinations. Further complexity is added with the choice of equipment packages and interior options. How has this challenge been met on the production line? “We have been very well prepared, with the help of our sister company Quattro GmbH (a wholly-owned subsidiary of Audi), which is located very close to the factory,” says Dintner. “Since September last year, we have carried out intensive production testing of the A1 in all its permutations within our business units for paint, body and assembly.” The roof contrast line, which incorporates a series of contrasting colours for the A-, B- and C-pillars, is one of the more noticeable exterior options available. How has this been handled in the paint facility and on the assembly line? “This design characteristic of the A1 is the responsibility of a dedicated section within the paintshop which concentrates only on the roof arch. It is staffed by specially trained personnel.”

Award-winning environmental management
Before production of the A1 started at Brussels, the plant had already demonstrated high standards of environmental awareness. In 2000, the Brussels regional government commended the plant as an ‘eco-dynamic business’. This was followed in 2001 with an accreditation from the EU Eco- Management and Audit Scheme and in 2003, the plant was awarded a three-star regional environmental certificate, the highest possible merit score.

Additional features to further reduce the environmental impact of the Brussels plant have been added during preparations for A1 production. These included optimization of energy usage in the bodyshop, a new rainwater retention pond, comprehensive soil remediation (the removal of contaminated soil) and the creation of a land registry, which includes renovation of the sewage system. As part of a ‘greening’ programme that is mandatory for all Audi sites, 100,000 trees are being planted in the area and around the city. 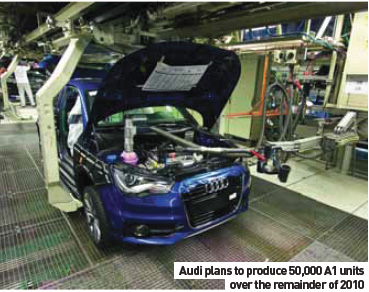 As the Audi A1 e-tron EV is to be manufactured on the same line as the standard models, will the line have to be adapted to accommodate this new model version? “It is a little too early to address production of the e-tron,” says Dintner. “The real challenge for all carmakers is to ensure that their personnel are equipped with the skills and knowledge required to effectively implement the new technologies that are being incorporated now, for current model builds. These are increasing in complexity at an astonishing rate.”

With the start of A1 production at Brussels, the company’s fourth European manufacturing facility, Audi looks set to maintain what has been a steady growth curve, while also preserving the Brussels plant as a centre for production excellence.