Consider the changes in vehicle sizes and weights over the last few years. The Mercedes-Benz W140 (1991-1998) S-Class saloon weighed approximately 2,000kg, depending on specification; the W220 (1999-2006) around 1,800kg, and the latest model, the W221, has remained around 1,800kg. A reduction of 200kg may not sound a lot but, given the struggle to balance power output, equipment specification and subsequently heavier chassis, these figure are indeed significant. Not only have new models been on an automotive weight loss programme, but fuel efficiency and aerodynamics have also been dramatically approved.

Another significant trend in volume production has been for smaller cars, and this can be expected to continue as fuel prices increase. Customers are downsizing their segment choice of vehicle and this, combined with greater use of lighter, high-strength steels, aluminium and composites, meaning vehicle mass will be further reduced.

The shift towards smaller, lighter vehicles goes hand in hand with the requirement for greater production flexibility, both in the variation of platforms and models on a single line and the ability to rapidly increase output without the need to bring in more equipment. GM, for example, has made a considerable investment in flex lines over the last few years. The OEM invested nearly $1 billion in revamping the Spring Hill, Tennessee Saturn plant between 2007 and 2008 to create a flexible assembly line that the automaker said would be able to build multiple products at the same time.

While the facility did lose a bid to become the production site for a new Chevrolet subcompact car, there are further new products that could bring the facility back to life after GM ends production and puts the plant ‘on standby’ in November 2009.

“They could certainly do a pickup and crossover SUV on the same line,” says Jeremy Anwyl, Chief Executive of Edmunds.com. “That would be taking a page out of the flexible assembly line book.”

Tom Coyne of Diamond Phoenix, a major conveyor supplier (see interview box, next page), sees the longevity of the plant rooted in its heavyweight equipment: “Smaller conveyors are a trend but, when I was involved in automating the Tennessee Saturn plant, the installed conveyors were of the standard capacity and it struck me that they would last a very long time, due to the lighter weight of modern vehicles putting a lot less strain on the conveyor.” 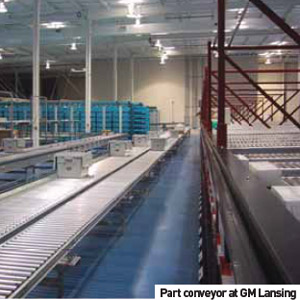 The move has saved the automaker between 35 and 45% in module, integration and installation costs. In addition, engineering time for setting up new conveyor lines has gone from weeks to days; sometimes even hours.

At the same time, they’ve really shaken up the vendor world, essentially changing conveyors from a system to a commodity. As with much factory equipment, a considerable portion of the integration work is done offsite. Equipment is built up in a vendor’s factory, tested, debugged, then moved to the plant, where it is put back together and tested for the final time.

CCRW uses a ‘three-legged stool’ approach in its quest to standardise conveyors; modules, engineering and installation. Implementing its Global Manufacturing System, it buys the conveyor modules from a single company for use in GM plants around the world. No matter if the plant is in China, Germany, Mexico, or the US, CCRW is buying a commodity product from the same company at the same price. Successful vendors are given a three-year contract that can be extended to five years if both parties agree.

GM buys the engineering on a regional basis, with ‘regional’ meaning an entire continent, such as in the case of Europe, or a single state or province, in the case of the US and Canada.

For the third leg – the installation work – services are bought locally, for much the same reason as the regional engineering procurement.

Tom Coyne, CEO of Diamond Phoenix, has a long material handling background, first at DEMATIC, where he worked on installations at many major carmakers, such as Ford, GM and Toyota. From 1987-97, he worked with Rapistan DEMAG, and then on to Group Manager of Integration Programs with responsibility for concepting, estimating, project management, engineering and construction site management. 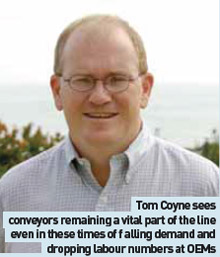 AMS - Tell us about some OEM installations.

TC - At Diamond Phoenix (DP) we have many OEM customers, but the DP tech base, be it carousel or automated storage and retrieval systems (ASRS), is not always suited to all automotive applications, such as body buffers, but it is perfectly suited to sequenced lines.

A fact of life in the auto manufacturing world is the forecasting system. In this system, a ‘broadcast’ goes out to all assembly suppliers of what is needed for on a daily or weekly basis. This goes beyond the JIT (Just In Time) delivery for assembly. This is an actual sequencing of the material needed for every individual vehicle in the assembly line, In-Line Vehicle Sequencing (ILVS). This is where ASRS buffer stack can be implemented for work in progress.

At Honda, the bumpers are staged in travelling racks for precise delivery when needed for a particular vehicle in the build sequence. Parts can be pulled fast and efficiently in sequence from the automated delivery of the horizontal carousel. In other words, the deluxe model bumper for the deluxe model will be pulled for that vehicle in the build sequence and the next car might a standard model and the bumper for that car would be in the exact location needed for the build sequence, keeping the order organized and effective.

AMS - And at suppliers? 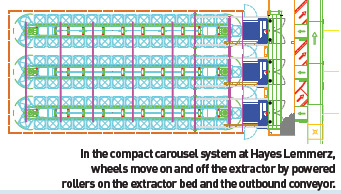 TC - At Hayes Lemmerz, we put in a complex line, serving an ASRS and buffered stock control, from foundry to finishing etc., from machining to powder coating. The carousel buffers store up to 2,000 wheels in the pre-machine buffer of differing sizes, handling the wheel from the side without touching the top surface. They can pick and store up to 500 per hour out of each individual buffer, record the location and part number for all stored wheels in order to maintain first, in first out (FIFO) objectives, and then option through software to manually enter requests for quantities of inbound wheels from the buffer. Movement between the carousel bin and extractor bed are controlled by the two extractor gripper arms to provide optimum surface contact and to prevent the wheel from tipping vertically. Wheels are then move on and off the extractor by powered rollers on the extractor bed and the outbound conveyor.

AMS - How much of any given conveyor do you make?

TC - Our expertise is in specialty conveyors, we buy in rollers and motors, we fabricate side channels. A lot of the work in automotive requires custom build due to size and weight and configuration.