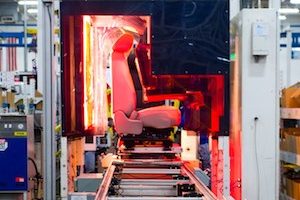 Portugal - The company has recently spent more than €5m (US$6.22m) to expand its automotive seating structures manufacturing facility in Valença - a small town situated in north Portugal. Production space was nearly doubled, and now covers an area of over 20,600 square meters, while the office space was also extended by 1,200 square meters.

"We're pleased to be able to expand our operations to better serve our customers, which will optimise our ability to deliver our world-class products," said Frank Orsini, executive vice president of Lear Corporation and president of Lear's seating business. "The Valença facility will feature increased state of the art technology in alignment with our commitment to operational excellence."

The plant in Valença began operating in 2009, and before the expansion, it employed around 300 people. It makes seating and structural chassis components and performs welding, painting and assembly for European vehicle manufacturers.

The news comes shortly after Lear announced record sales of $20.5 billion during 2017, up 10% year-on-year. In Europe and Africa, net sales rose from around $7 billion to $8 billion.