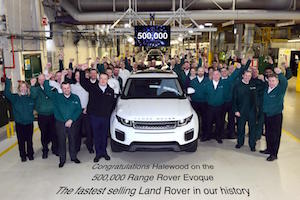 UK – The milestone vehicle rolled off the production line at the Jaguar Land Rover Halewood plant, four years after its sales launch. The Evoque has reached the half-million mark faster than any other Land Rover model.

Richard Else, operations director at Halewood, said: “The Range Rover Evoque has been a fantastic success for Halewood and for Jaguar Land Rover. We are very proud of our award-winning SUV and we are looking forward to welcoming the new Evoque Convertible to Halewood very soon.”

For production of the Evoque, the factory was transformed with a £250m ($349.7m) investment. Over four years, the workforce has trebled and output quadrupled. Halewood now operates 24 hours a day, on three shifts, and turns out one vehicle every 80 seconds.

The Evoque Convertible was unveiled at the Los Angeles Motor Show in November 2015, ahead of a sales launch this spring.