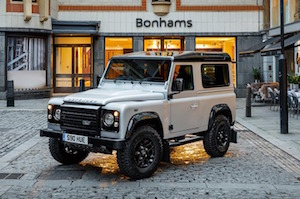 UK – The milestone vehicle, featuring unique design details, rolled off the line at the Jaguar Land Rover factory in Solihull. It will be sold at a charity auction in December, when the model will enter its final days of production.

On its aluminium fender, the ‘Defender 2,000,000’ vehicle has an engraving of a map of Red Wharf Bay, where the design for the original Land Rover was drawn in the sand. A graphic on the leather seats also depicts Red Wharf Bay. Badges reading ‘No. 2,000,000’ are positioned on the rear of the vehicle and the interior console, matched by similar logos stitched onto the headrests. The registration plates are ‘S90 HUE’, a reference to the first pre-production Land Rover, which was registered as ‘HUE 166’. An aluminium plaque signed by all who were involved in the assembly process is fitted to the plinth of the driver’s seat.

The exterior of the vehicle has been finished in Indus Silver satin paint, while Santorini Black completes the wheels and wheel arches, roof, door hinges, grille and mirror caps.

The original Land Rover Series I entered production at the Lode Lane facility in 1947. Since then, 2m Series I, II and III Defenders have been made at Solihull.