While machining is essentially mature technology, process variables such as the machine, tooling, workholding, programming, coolant, material and so on mean there is no end of opportunity to seek competitive gain. Of course, once a specific advance has been identified, it normally doesn’t take long for the remainder of the industry to switch on.

One of the most notable recent trends relating to powertrain component machining has been the move away from conventional flood coolant to minimum quantity lubrication (MQL). Ford has been among the pioneers of this shift. In fact, the company has just extended MQL to six plants globally and estimates that this will double in the coming few years; a clear reflection of the benefits.

Less is more
MQL works by lubricating cutting tools with a fine spray of oil directed exactly when and where required. It is a strategy that generates savings in many areas, including reductions in oil mist generation, biological contamination of coolant, waste water volume, costs for capital equipment and regulatory permits. MQL also improves recycling and transport of coolant-contaminated chips. According to Ford, MQL, which the company prefers to call ‘near-dry machining’, can save more than one million litres of water per year on a typical OEM machining line. Ford’s Cologne engine plant in Germany, for example, decreased water use in machining by 50% per engine between 2011 and 2012 by switching to MQL.

For the 1.0-litre EcoBoost produced at Cologne, the amount of coolant required to machine aluminium cylinder heads has dropped to just one litre for 250 units, compared with up to 500 litres using previous cooling methods. The 1.0-litre EcoBoost production line in Cologne today uses a total volume of 235,000 litres of coolant, compared with 1.25 million litres in similar high-volume production processes.

MQL can also reduce the amount of oil needed to machine an engine or transmission by over 80%, to approximately 100ml – about half the size of an average drinking glass. Aside from Cologne, other Ford plants that have switched to MQL are the Changan Ford engine plant in China, the Craiova engine plant in Romania and the Romeo engine plant in Michigan. Two Michigan transmission plants, at Livonia and Van Dyke, have also adopted MQL.

Machining challenges
The challenge to innovate is equally important along the automotive supply chain. For instance, take Grainger & Worrall in Telford, UK, a specialist in both casting and machining powertrain components such as engine blocks and cylinder heads.

The company’s latest casting solutions are aimed at helping automotive OEMs face the demands of powertrain components which need to be lighter and smaller, the latter as a result of engine downsizing trends. Grainger & Worrall has a long history of using technologies such as computed tomography (CT), scanning technology and five-axis machining to design and develop complex, lightweight engine and transmission parts.

From a machining perspective, the company has developed the capability to machine high feature content cylinder heads and engine blocks without using traditional horizontal techniques. While Grainger & Worrall’s horizontal machining approach offers cycle time advantages in the production environment, it also presents some disadvantages for small batch and prototype machining.

The company’s approach to short lead time new product introduction (NPI) has seen its machine shop become equipped with high-specification, five-axis vertical machining centres. Located alongside the existing production machining cell, the verticals allow Grainger & Worrall to break down individual operations and spread them over a range of machines. The advantage in prototype production is compressed lead time as several operations can be proved simultaneously. The recent arrival of an additional twin-pallet five-axis CNC machine marks the culmination of a £1.25m investment programme at the company’s facility.

Mark Davies, group manager of Grainger & Worrall Machining, says: “Over the past four years we have doubled the workforce and enjoyed a five-fold increase in turnover thanks to our continuing commitment to skills development and adopting the latest machining technology.”

The investment story is similar at the Huddersfield, UK facility of VTL Group. Here, project leader Chris Law says that the ability to hob using the main spindle of a Traub TNL18/7 sliding head lathe while reverse-end machining in the counter spindle results in a one-hit cycle time of 60 seconds when producing spline shafts for Toyota gearboxes. Before the machine was purchased, other types of slider took twice as long to complete the part.

The mild steel spline shaft, part of a shift lever assembly for the Toyota Yaris and Avensis gearbox, is produced from 18.5mm diameter, 4m bar, which is fed into the TNL18/7 by an LNS Express 220 magazine. Balanced outside diameter (OD) roughing and finishing in the main spindle along 80% of the shaft length is followed by centre drilling the end, drilling a cross-hole, countersinking, spline hobbing and subsequent milling of a single tooth.

Meanwhile, the previous front-end-machined and parted-off workpiece, which has been picked up synchronously in the counter-spindle, undergoes simultaneous machining operations on the reverse end. The remaining 20% of the OD is then turned, an undercut is machined and a hexagon is milled around the end. The tightest dimensional tolerance is 60µm total on two of the ODs.

Two Traubs at a time
A second Traub sliding head lathe, a TNL18P, was sourced simultaneously to produce two less complex transmission shafts, also in cycles involving turning and cross-drilling. The Traub TNL18P sliding head lathe is of slightly lower specification, with fewer CNC axes on the upper turret. The machine can still produce the spline shaft in an 85-second cycle, including simultaneous hobbing and reverse-end working. The lathe provides back-up for the TNL18/7.

The main role of the TNL18P, however, is to produce the other two, smaller shafts which form part of a selector lever assembly for the same Toyota gearbox. Cutting trials showed that these mild steel components are also produced faster on the Traub than on other sliders: at 32 and 20 seconds respectively, the cycles are 18 and 29% faster. Key to the speed of TNL lathes are the fast kinematics and the design of the top tool turret, which allows machining to be performed with its unusual Z-axis movement and overlapped with additional operations.

Another design feature of the Traub lathes is that they can be used in either sliding head mode with the bar supported by a guide bush, or in fixed head mode with the bar gripped in a spindle collet. The spline shaft definitely requires a sliding head cycle, while the shorter of the two simpler parts could be produced a little more efficiently in fixed head configuration. However, to avoid changing over the TNL18P and the consequent downtime, albeit short, this machine is also used permanently as a sliding headstock lathe.

Forming part of a £1.5m investment by VTL in a new cell to produce these automotive assemblies for Toyota, the two Traubs are joined by a Bauromat automated welding machine, a Studer CNC grinder and an automatic assembly machine from Expert Automation. When it enters full production in February 2014, the cell will run 24/5.

Eastern advances
Of course, machining investment is not restricted to western economies. As many will know, China remains the world’s biggest vehicle-producing nation according to OICA 2012 data. Unsurprisingly then, thirst for new machining technologies is high here too. This was illustrated recently by Mollart, which declared it had just taken its 40th order for deep-hole drilling machines due for installation in China. The order is for a DrillSprint machine, which will produce automotive gearbox lay-shafts, has a capacity between 2mm and 25mm diameter, and a maximum hole depth of 1,500mm. Up to four spindle configurations are available. 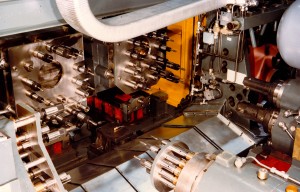 India is another country high on the same list of vehicle producers, in sixth place in fact. Again, manufacturers here are keen to exploit the latest machining technologies for competitive gain.

A case in point can be seen at the Gurgaon facility of Bajaj Motors, which is an early user of the latest insert grade for steel turning, GC4325, from Sandvik Coromant. Bajaj Motors turns critical transmission forgings for automotive customers such as Tata, Hero MotoCorp, Suzuki, Mahindra, Nissan and Renault.

“When Sandvik Coromant said the new GC4325 grade would offer a 20-25% improvement over our best running grade, we didn’t believe them,” states Tarun Bhargava, general manager (engineering) at Bajaj. “Even when they showed us the results, we thought there might be some manipulation involved. So we ran trials on two different machines and the outcome was the same both times. As a result, we are now using GC4325 to reduce our cost per component, which will also improve our profit margins.”

Opitimising tool life
The area of steel turning is arguably the mainstay of automotive machining operations the world over. Yet, because of the need to avoid tolerance loss and subsequent rework or scrap, there prevails a requirement for safe, predictable tool life. As a consequence, machine shops often hold back on productivity by running well below recommended cutting speeds. In turn, this has driven a culture of careful process supervision, or planned, frequent stoppages to change inserts. The broad, mid-range ISO P25 application area is the culprit, largely because it embraces materials from soft, low-carbon steels to high-alloy, hard steels, along with forgings and castings.
Historically it has proven difficult to develop cutting tools optimised for turning across such a wide spectrum of steel types; until now.

P25 upgrades
Advances in material science and manufacturing processes at Sandvik Coromant have resulted in a new-generation P25 grade, GC4325. This grade can be used to improve security and performance across a broad variety of turning applications involving various steel types, operations and conditions. These include roughing and finishing, continuous and interrupted cuts, and wet and dry machining. An added advantage is that tool inventory can be reduced significantly.

So how does it work? GC4325 achieves longer tool life through retaining an intact edge-line – an edge that cuts metal effectively without compromising surface finish. This in turn increases machine utilisation through fewer tool changes. Limiting continuous, controllable wear and eliminating discontinuous, often uncontrollable wear, is the secret of success when turning in the ISO P25 application area. If the edge-line is broken by the wrong type of wear, rapid breakdown occurs and results in unacceptable parts and loss of machining security.

According to Sandvik Coromant, GC4325 has the highest recommended cutting data of all P25 grades – and the process security to maintain it. Depending on the application, higher metal removal rates and cutting speeds of well over 400m/min can be achieved.

Another early adopter of GC4325 is UKM Group, which has two plants in Germany and one in France. The company supplies powertrain parts to customers such as Volkswagen, Audi, Scania and MAN.

“Our tests have shown that GC4325 is very good and we now want to use it to optimise our turning operations by increasing component quality and reducing non-productive time and costs,” says methods engineer Ron Oehmigen.

For a machine shop making full use of existing means, Sandvik Coromant declares that up to 30% additional productivity is available from the application of GC4325. Few will say no to that and hold back on their competitiveness.