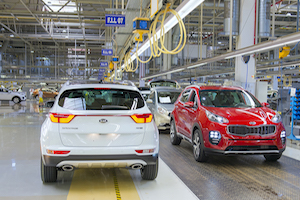 Slovakia – The OEM celebrated the anniversary today at its only plant on the continent, Žilina, where 2.5m vehicles and 3.8m engines have been made since 2006. The factory has received investment of more than €1.7 billion ($1.8m).

The initial outlay of €700m to build the plant was followed by further expenditure to add new models and technologies. In 2016, Kia has invested €60m and says it will invest a further €130m next year in “innovating the company’s existing product portfolio”. According to Eek-Hee Lee, president and CEO of Kia Motors Slovakia, Žilina is now “one of the most efficient production facilities across the Hyundai Motor Group”.

Žilina operates on three shifts and directly employs 3,800 individuals, supporting 20,000 jobs at the plant and at its top 40 suppliers. The production line-up incorporates the cee’d model family, which has accounted for 45% of output over the past ten years, plus the Sportage and Venga. The factory exports to 95 markets but has also delivered 40,000 vehicles within Slovakia.

The two engine shops at Žilina produce petrol and diesel units, with the former accounting for 53% of the cumulative output. The most in-demand engine is the 1.6-litre diesel, representing 20%. Nearly half of the engines manufactured at Žilina are shipped to the Hyundai operation at Nošovice in the Czech Republic.