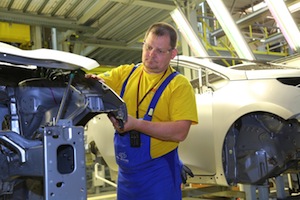 Slovakia – The achievement by Kia Motors Europe comes eight years after the start of production. The cee’d GT five-door hatchback and its 201hp, 1.6-litre T-GDI engine were both made at the company’s Slovakian facilities and are destined for export to the Netherlands.

The cee’d is manufactured exclusively for the European market at Kia Žilina and accounts for over 21% of the OEM’s sales in the region. More than 75,960 were sold in 2014, making it the second-bestselling Kia model in Europe after the Sportage compact SUV, which is also produced at Žilina. The cee’d family has accounted for half of the total output since volume production began.

Later in 2015, Kia will expand its line-up with the GT Line model, heralding the arrival of the new, downsized 1.0-litre T-GDI engine and seven-speed automatic transmission in Europe. The GT Line specification will be available for all three members of the Kia model family: five- and three-door hatchbacks, plus the Sportswagon estate.

The launch of the original cee’d marked a new era for the growth of Kia in Europe, as the company’s first model to be designed, engineered and manufactured exclusively within the region. In total, 646,305 units of the first generation were made between 2006 and 2012.