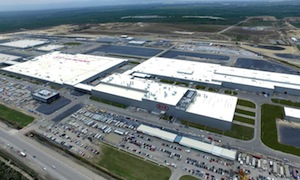 Mexico – The factory in Pesquería, Nuevo León, has been completed in 13 months, the fastest construction of any manufacturing facility in the OEM’s history. An initial investment of $3 billion has been made by Kia and its suppliers, which is expected to generate 14,000 direct and 56,000 indirect jobs.

Kia says the new plant features “sophisticated production equipment” including a $75m stamping press which is the largest at any of its facilities, 18 metres high and weighing 3,863 tons. “Once mass production commences, it will take less than one minute for a vehicle to come off the assembly line, making our facility among the most productive among all Kia plants globally,” said Seong-Bae Kim, President of Kia Motors Mexico.

The complex incorporates sustainability measures such as an energy monitoring system, an integrated water treatment plant and LED lighting. Additionally, it is planned that the factory will introduce alternative sources of power, for example solar. Kim said the advanced technology and manufacturing processes at the plant will make it “one of the most environmentally friendly automotive manufacturing plants in the region”.

Kia’s new Mexican assembly plant joins ten others in Korea, China, Slovakia, Russia and the US. According to the OEM, it will export 60% of its production to North America and 20% to Latin America, while another 20% will supply the domestic market. Kia also said its Mexican plant will increase the flow of vehicles to the UK by easing pressure on Korean production.