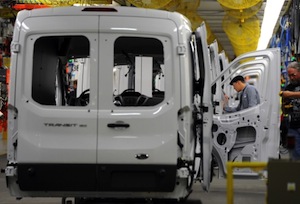 US – Following a $1 billion investment and the recuitment of 2,000 employees, the first unit of the new model has now rolled off the line at the Kansas City Assembly Plant.

Ford’s investment has involved retooling and the addition of a 437,000 sq.ft stamping facility and a 78,000 sq.ft paintshop. The latter will use three-wet and two-wet monocoat processes which are faster and more environmentally friendly than conventional painting. In addition, almost 550 robots have been added in the bodyshop, more than 700 new assembly tools in trim and chassis and 18 new conveyor systems totalling 5,565ft.

“These upgrades have helped make the Kansas City plant the global standard for Ford’s new manufacturing facilities across the world,” commented Bruce Hettle, Ford vice-president, North America Manufacturing. He added that in 2014 the company will open three new production facilities to support its global growth – “two of them in Asia-Pacific and one in South America”.

The Transit will eventually replace the E-Series van in the US and will be produced in three body lengths, two wheelbases on van and wagon and three roof heights; in van, wagon and chassis cab and cutaway body styles; and in XL and XLT trim levels. The standard engine is a 3.7-litre V6, with options for the F-150 3.5-litre EcoBoost or the 3.2-litre Power Stroke diesel engine.