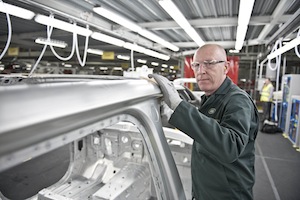 UK – The Jaguar vehicle, which follows the XE into new production facilities at the West Midlands plant, will require an additional 1,300 personnel. The expansion at Solihull is part of JLR’s plan to develop its capabilities in aluminium and other lightweight technologies.

The company has already invested £1.5 billion ($2.3 billion) to support the introduction of these new materials, representing the largest single investment in the 70-year history of the Solihull site. The result is a ‘factory within a factory’ which incorporates Europe’s largest aluminium bodyshop and final assembly hall.

The OEM began its aluminium vehicle production in 2003, with the launch of the XJ. Following on from this pioneer, the XE will become the first Jaguar to be made at Solihull when it goes into production early this year. Meanwhile, the Jaguar performance crossover will go on sale in 2016.