Invigorated by a £200m investment, the facility has become one of the UK's most productive car plants 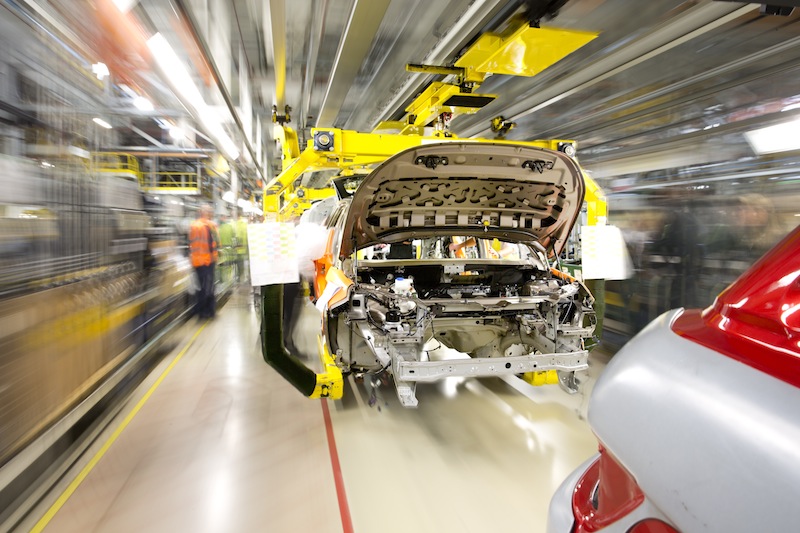 Of all the turnaround stories emerging from the recent success of the British car industry, that of Jaguar Land Rover’s plant at Halewood, near Liverpool, is one of most compelling. Started in 1962 by Ford, the plant was on the verge of closure at the turn of this century. Even after it won a reprieve to build the Jaguar X-Type in 2001, the failure of that model to lure buyers away from the likes of the BMW 3-Series meant Halewood was running well under capacity, and the end of X-Type production in 2009 brought a three-week shut-down and job losses.

Today it is a different story. Halewood took on the second-generation Land Rover Freelander SUV in 2006, but it was the introduction of the related yet far more successful Range Rover Evoque from 2011 that has really shifted the plant into top gear again. Demand for the luxury SUV was such that Halewood moved to 24-hour operations for the first time in its history and last year celebrated the production of its 1 millionth vehicle. In total, the plant made 180,000 vehicles in 2013 – the absolute maximum, according to its director, Richard Else.

In October, Halewood made its last Freelander and started building its replacement, the Discovery Sport. This comes as Halewood is operating as lead plant for JLR’s new full-scale facility in China, at Changshu near Shanghai, which started production of the Evoque last October. The Discovery Sport is also scheduled to be built at the Chinese plant, which will have a capacity of 130,000 vehicles per annum and also includes an engine facility set to launch production next year. Halewood still builds the Freelander in kit form for JLR’s plant at Pune, India, and will do so until the end of the year. Meanwhile, it looks likely that Halewood will take the lead again in setting up JLR’s forthcoming Brazilian facility, at Itatiaia in Rio de Janerio State, which is due to start production in 2016.

Pressure to achieve higher efficiency
Normally the ‘job number one’ ceremony for a new model takes place at the end of the line, but the first unit of the Discovery Sport – the seven-seat SUV that will take on the likes of the Audi Q5 and BMW X3 – was revealed in the shadow of Halewood’s immense Aida servo press line. According to JLR, this 13-metre high and 85-metre-long piece of equipment swallowed up £45m of the £200m investment to build the Discovery Sport, and is the first of its kind in the UK.

The five individual presses (one 2,500 tonnes, one 1,800 and three rated at 1,200 tonnes) are encased in a giant sound enclosure that required the raising of the roof by ten metres to incorporate the overhead crane which lifts the dies into place. Meanwhile, the basement area had to be dug down a further two metres to seat the foundations and fit the conveyor belt that removes the off-cuts for recycling. The installation of the press line took 18 months.

The 30,000 sq.m press shop at Halewood is hugely important for JLR, as it makes 80% of the parts required by its UK operations, including the plants at Solihull and Castle Bromwich in the West Midlands. The new line can press both aluminum and steel, and JLR claims that the dies (of which there are 234 sets) can be changed in under five minutes, compared with 55 minutes for the quickest of the nine other press lines alongside it.

Such efficiency will be crucial in JLR’s rush to build cars fast enough to meet demand – particularly its more recent Land Rover models. The flexible and highly controllable Aida press line will run a 24-hour shift, making parts ranging in size up to body side panels at its maximum strike rate of 20 per minute. Technically, it can make all components for Halewood, but the work will be shared with other presses, some of which date back to the start of operations in 1962, when they pressed panels for the Ford Anglia. “The maintenance team do a fantastic job,” observes Else. The oldest presses were made by USI Vickers, but all have been updated.

An additional advantage of the new line is its lower energy use, which is helped by a regenerative feature during the draw process that feeds power back into the grid, updating older systems that stored electricity in resistor banks.

The press shop employs 600 of the 4,750 workers at Halewood and is currently operating on four shifts. The headcount is a long way off the 14,500 individuals who worked at the plant in its Ford heyday, but the number has tripled in the last three years.

Re-equipping the bodyshop
After the press shop, it was the bodyshop which received the largest chunk of investment from the £200m total, primarily for greater automation. As at Jaguar’s new Solihull bodyshop which is making the aluminium-intensive shell for the new XE sedan, most of the 260 new robots were supplied by ABB. Automation in the Halewood bodyshop now stands at around 80-85%, according to Else.

New to the shop is an enclosed laser welding station that puts together the aluminum tailgate for the Discovery Sport. The part is too complex to be pressed in one go, hence the welding. Else admits that the kit was expensive (without naming a price) but reckons its four-laser head operation uses less electricity. Each laser consumes 4kW, but such is the concentration of the energy that it equates to 14 billion watts per sq.m. However, enclosing it has resulted in a class-one laser safety rating – the same as a CD player. Despite the investment, Else says the company is looking at ways of applying more traditional welds to the aluminium components.

Nearby, new enclosure cells house a subassembly area where robots make doors for the Discovery Sport, including welding and hemming them. “I always say doors are one of the most important parts of the car because it’s the first thing a customer will come in contact with,” explains Else. “You’ve got to get the doors absolutely right. The reason we use robots in this area is to really get the dimensional precision correct on the doors. It’s so important in terms of their premium feel.” This subassembly process is similar to that of the Freelander (the facilities for which were being dismantled at the time AMS visited), but Else says the equipment is now more flexible. “It gives us the ability to do new derivatives in the future. This is a big piece of investment,” he says.

The finished bodies are sent off to the paintshop, situated in the roof, then down to the four assembly lines that stretch for a vast distance within the building. “I always joke you can see the curvature of the Earth down here,” says Else, pointing along a line. The whole site covers 300 acres. 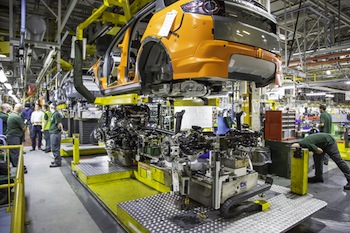 An impressive 80% of cars made at Halewood are exported, with China the biggest market. Else explains that 70% are transported by rail to Southampton on the southern coast, taking advantage of Halewood’s railhead. The destination is surprising, given nearby Liverpool’s long history as a port, and Else is keen to export more cars from there: “It would help from a logistics point of view if they were all coming out of Liverpool, given it’s only ten miles down the road”. That might yet happen as work continues on a £300m project to deepen the approach to the Port of Liverpool and create a new terminal for larger ships by next year.

Right now, Halewood makes 4,000 cars a week, with one vehicle coming off the line every 82 seconds, and ships them to 170 countries. The only way to expand production would be to build a new facility on-site – something that can be done, Else confirms. The site is also shared with suppliers, including interior specialist IAC, which trims and assembles cockpits for the Evoque. Getrag also has a plant on-site, in partnership with former JLR owner Ford, although it does not make gearboxes for the two Land Rover models built less than 500 yards away. Land Rover estimates that the new Discovery Sport has resulted in £3.5 billion of contracts for 55 UK suppliers.

Halewood’s survival is remarkable in light of the many threats to its existence over the last 50 years; the next one could well be the dilution of production as its bestselling models are farmed out to production sites overseas, including China. Else and JLR, however, are so confident of growth that they predict Halewood will still run at full capacity despite the loss of its biggest export market.