Installing a flexible future at Kassel

In the assembly of axle drives for commercial vehicles, all relevant machine and operating data is acquired by a new RFID solution. In order to optimally synchronise the flow of materials and data, the transport controllers and workstations must be decoupled. This creates the prerequisite for a flexible conversion of the assembly line to meet a future product generation.

Daimler AG is one of the leading makers of automobiles and commercial vehicles. At the Mercedes-Benz plant in Kassel, Germany, approximately 3,000 employees produce around 650,000 axles annually for trucks, vans and trailers as well as drive shafts and passenger car components. The production encompasses parts manufacturing and processing as well as the preliminary assembly and main assembly. 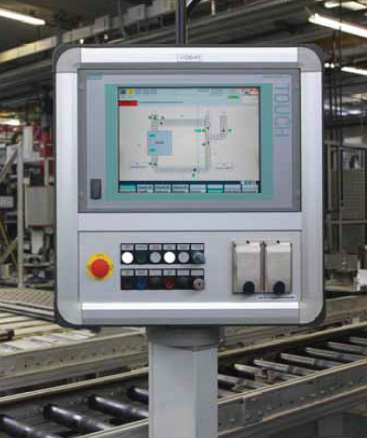 The goal of the technically interesting project covered here was to decouple the transport controllers – installed at the pre-assembly and main assembly of the axle production for vans – from the workstations to make the integration of additional functions and operations easier when carrying out the plant expansion planned for 2012. Expected product changes and adjusted quality criteria of future axle series necessitated the modification of processing sequences in their production. This was to be realised by a conversion of the assembly line.

At the same time, the conversion creates a new organisational foundation for quality management. For example, parts data collected during the production could in future be made available, accompanying the product throughout all process stages. This data can be viewed at any time and is archived in a traceable manner. Up to now, the basic process control only communicated with the product planning and control system. The product carriers moved the parts on the transport line without a connection to the product data or workstations. The memory chips at the product carriers only contained their respective numbers.

Basic process control and workstations of assembly lines are decoupled
“Ease of use, rugged construction and non-contact operation without line of sight were arguments favoring an RFID solution when planning the new identification system,” emphasises Jürgen Golob, who is responsible for electrical modifications as a member of the maintenance and production engineering team at the Kassel plant. “The transponders can be reliably read and written to, even in harsh environments – and at remarkable speeds,” he adds. For Golob, however, it was clear that an RFID solution only then makes sense if all stations of the assembly line are coupled to the system. This meant not only that the workstations required suitable interfaces, but also that the conveyor belts had to be equipped with read/write devices. That is why Kassel was looking for a solution provider that could decouple the basic process control and the workstations of the assembly lines, and implement them in a new industry-standard-conforming installation. At the end of the selection procedure, one of the region’s leading machine builders was contracted with the conversion. In December 2009, automation firm Siemens presented its solution concept. After the team jointly formulated the details in the system specifications, the implementation of the automation solution was started in May 2010.

Previously, there were two controllers for the pre-assembly and main assembly. At each product carrier, a chip was mounted for its identification, whose storage capabilities – as mentioned – were quite limited. One only knew which pallet was at which workstation. Only once the axles were completely assembled was the data transmitted to the head controller; in the meantime, the data was buffered in the associated decentralised controller. A power failure at this PLC would lead to a loss of data. A real-time assignment of data records and products did not exist. Since all data is now stored on new RFID data storage, a power failure no longer poses a problem.

Sufficient reserves
The new RFID solution at the Kassel plant is based on 45 read/write devices of the type SIMATIC RF350R by Siemens,which are installed along the assembly lines and at the workstations. Each read/write device is connected to an external antenna and networked with an ASM 456 communication module. A communication module also serves two read/write devices each for the network connection via PROFIBUS. The distance between transponder and read/write device is up to 125 mm. The 80 workpiece carriers are equipped with SIMATIC RF340T transponders possessing a storage capacity of 8kB. “There are thus sufficient reserves even for growing demands,” describes Golob. “We also left gaps in the memory allocation of the workstations so that we do not have to shift data records if new information is added.”

Other components of the new installation include two SIMATIC S7-317-2DP controllers for the transport lines. At the pre-assembly and main assembly, three central PC-based operator panels SIMATIC PC477, each with 15” touchscreen and pedestal, are permanently installed. They provide workers with an overview of the entire production line and allow them to intervene in the operation. The process visualisation at the stations takes place via SIMATIC HMI panels. Some stations also required new software to communicate with the read/write devices. The operator panels also received additional screens for the depiction of data medium and manual operation functions. Besides the production data of the pre-assembly and main assembly, a data record also contains a so-called contact pattern that, for example, provides information on the tooth flank interaction of crown wheel and drive pinion. Since these images are memory-intensive, they are not transmitted to the transponders, but directly to the server of the manufacturing execution system (MES) responsible for parts picking, assembly monitoring and machine data acquisition. A pallet change occurs during the transition of the workpiece from the pre-assembly to the main assembly. While doing so, some of the data is transferred to the RFID data medium of the new pallet by means of a DP/DP coupler and PROFIBUS. As soon as the rear axle housing is complete, they enter a decoupling module, where the data of the main assembly is likewise transferred to the MES server. The RFID data medium is then erased and the product carrier channeled back into the assembly loop.

Product carriers with NOK products go to the reworking station
The data medium automatically also receives information from the individual processing stages of the production about the respective workpiece quality. Before a pallet exits a station, the controller determines whether the part made was deemed “OK” or “NOK” (not okay) during the inspection, i.e. has been classified as “good” or “bad”. There are read/ write devices that are directly assigned to workstations. Others are implemented at the transport routes and capture data medium information from the passing pallets. If a product carrier, for example, passes a gate, the read/write device reads the data record and the controller decides, based on the quality status, in which direction the pallet goes. Product carriers with NOK products approach a reworking station, while OK parts reach the next assembly station. 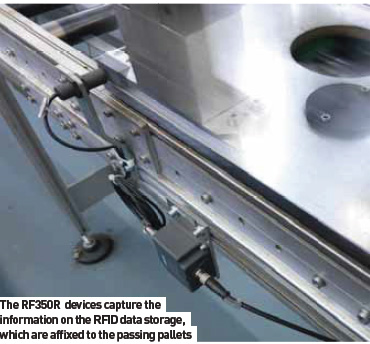 The first conversion phase with trial installations was conducted during weekends and production breaks from May to July 2010. So as not to disturb the existing production, the new process steps were extensively tested: For every step, the corresponding new software was loaded at several stations. The read/write systems were wired and tested. Just before the return of production, everything was restored, with all components rewired and connected back to the transport controller. “The software, too, was deactivated until the next test run. Always three steps forward and one back,” remembers Golob.

Further conversion of the assembly line planned By mid-July 2010, the test installations had been largely concluded so that the “hot” conversion phase started at the beginning of August. Due to plant holidays, Kassel was lying idle. “After about 14 days, the work was far enough along to start with the full trial operation and the optimisation,” remembers. With some pride he reflects: “The system ran without problems or noteworthy interruptions from the very beginning, although there is always something that is not thought about at the onset. Such a system is, after all, a unique specimen and not a mass product.” That is why service technicians from the partners and suppliers were on-site accompanying the production during the first weeks – to quickly intervene if needed.

In the final week of conversion, the first production employees arrived to get to know the new system. To attain the regular production level (moment at which the target capacity is achieved for the first time) as quickly as possible, the in-house-developed operating data acquisition system Prisma supplied valuable information as planned to the new production control. Last but not least, the overall success was the result of optimised collaboration between production planning, production and maintenance departments.

The Mercedes-Benz plant in Kassel is now working with a solution in which the “intelligence” of the transport controllers of the pre-assembly and main assembly is integrated into the workstations. Prior to the production start of the new axle generation, another conversion and expansion of the assembly line is required due to further changing process steps. “The system now is state-of-theart. With it, we have created the prerequisite to make the implementation of the upcoming changes considerably faster and more efficient than would otherwise have been possible,” points out Golob. The new RFID solution always provides meaningful, current data that accompanies the product from the start. The optimally synchronised flow of materials and data enables a reliable identification that can be tracked and traced.