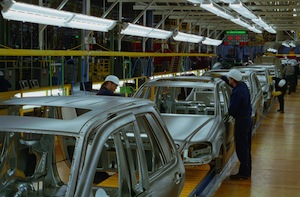 US – The start of operations (SOP) at the new facility in Tennessee is scheduled for June 26 this year. The first engine to be assembled will be a 2.0-litre turbocharged gasoline four-cylinder model.

The 310,000 sq.m plant is the result of a partnership between Renault-Nissan and Daimler and was built over a period of two years at a cost of $319m. It has a 250,000-unit annual capacity and will initially make engines for European versions of the Infiniti Q50 sports sedan and the Mercedes-Benz C-Class that are assembled in Tuscaloosa, Alabama. Following ramp-up, the workforce will increase from 200 personnel at present to 400.

The facility incorporates energy-efficient features such as a heat-reflecting white roof and a skylight grid for natural lighting. Describing the plant as “state-of-the-art”, Gary Edwards, vice-president, Powertrain Operations and Battery Plant, said the brand would build on 17 years of powertrain experience at Decherd, “taking the best quality standards from Japan and Germany and combining those with our highly skilled US workforce”.

Johan de Nysschen, president of Infiniti, commented: “It is the first step of our manufacturing expansion that will include the start of vehicle production in China later this year and in Europe next year.”