Improved compressor range to save money and energy 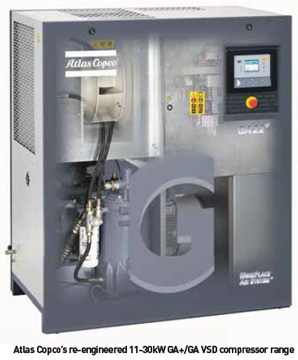 Atlas Copco has redesigned and upgraded its popular fi xed-speed compressor, the GA 11+-30, and the variable speed version, the GA 15-30 VSD. To better match airflow to customers’ requirements and eliminate the need to oversize, Atlas Copco has launched a 26kW model, available with the new-generation VSD.

Greater FAD means customers can select smaller compressors for the same applications, saving money and energy. All the models in the GA+/GA VSD ranges offer world-class FAD. Atlas Copco’s engineering breakthroughs have increased FAD of the GA+ by a minimum of seven per cent and up to 17 per cent compared to the previous GA models. For the GA VSD, the improvement spans from nine per cent to 24 per cent.

Specific Energy Requirement (SER) is the true measure of how much electricity a compressor will use. With improvements of between three and 11 per cent for the GA+ and 11 to 13 per cent for the GA VSD, the improved compressors from Atlas Copco have one of the best SERs achievable, making them among the most energy efficient on the market. Energy consumption can be reduced even further in the full-feature version by integrating the dryer in the unit.