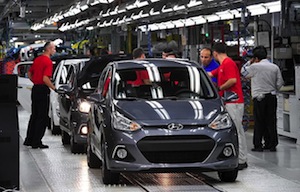 Turkey – The milestone vehicle which rolled off the line at Hyundai Assan Otomotiv Sanayi (HAOS) was an i10 destined for Germany. The model was added to the plant’s production line-up last year, joining the i20.

The investment of $609m in 2013 doubled the capacity of the plant to 200,000 units. Following its establishment in 1997 as Hyundai’s first overseas facility, HAOS received an initial capacity boost to 100,000 units in 2007. The plant focused on production for the Turkish market until 2002, when Starex exports began to nearby regions.

HAOS is now the sole manufacturing base for i10 and i20 cars intended for the Turkish and European markets. Operating on three shifts, the plant made around 100,000 units in the first half of 2014, the majority being the i10. Almost 90,000 units were exported to 30 markets, mostly Europe.

Following the recent expansion at HAOS and taking into account Hyundai’s plant at Nosovice in the Czech Republic, the OEM’s production capacity in Europe now exceeds 500,000 units. More than 90% of its vehicles sold in Europe will originate from these two factories.