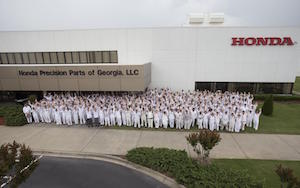 US – Honda Precision Parts of Georgia (HPPG) started transmission production with 179 workers in 2006. Thanks to cumulative investment of over $217m, the workforce now exceeds 500 individuals and the capacity of the plant is 375,000 per year.

HPPG launched production with a five-speed transmission before shifting to a six-speed version through an investment in 2012. Today, it makes transmissions for Honda vehicles including the Odyssey, Pilot and Ridgeline. The one-millionth unit was produced in October 2010.

Honda has turned out more than 21m transmissions in America since it started to produce automatic units in Ohio in 1989.