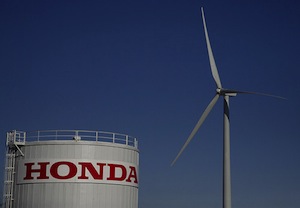 US – Six months after their installation at the transmissions plant at Russells Point, Ohio, the OEM says the two turbines have exceeded projected output. The estimate had been upwards of 10,000MWh per year, accounting for 10% of power requirements; at their highest output, in April, the turbines were providing 16.26%.

According to Honda, the installation of the 260-ft tall turbines with their 160-ft blades makes Russells Point the first major automotive facility in the US to receive a substantial amount of its power from on-site wind turbines.

The Russells Point turbines are intended to help Honda to reach its goal of lessening its environmental impact by 2020, including a 30% decrease in CO2 emissions from its products and “significant” CO2 reductions from its plants and other operations, when compared with 2000 levels.