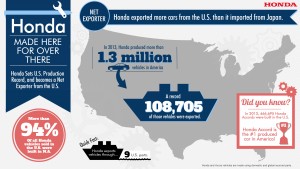 Testsuo Iwamura, president and CEO at Honda North America, described the new development as “a natural result” of the company’s commitment to the area; Honda has invested $2.7 billion over the past three years to expand its production operations in the region. Almost 95% of Honda and Acura vehicles sold in the US are now made in North America.

Production figures for the US and North America represented a 7.4% and a 5.3% increase respectively on the 2012 records. The company’s plants in Ohio and Indiana and Jalisco, Mexico, all hit new highs.