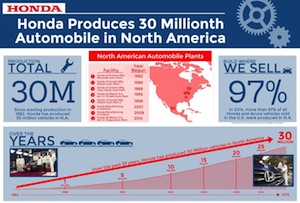 US – The OEM started production at Marysville, Ohio, in 1982 and has since established plants in Canada and Mexico as well as the US. Today it has eight North American manufacturing locations, accounting for 97% of the Honda and Acura vehicles sold in the region. The 30m cumulative production total was reached on September 15.

The cumulative output of each Honda plant is given below.

The vehicle production is complemented by engine operations in the US at Anna, Ohio, and Lincoln, Alabama, as well as Alliston, Ontario, in Canada and Celaya, Guanajuato, in Mexico. Automatic transmissions are made at Russells Point, Ohio, and Tallapoosa, Georgia and more recently Celaya. Honda’s total investment across vehicle, engine and transmission facilities is more than $17 billion and it employs 28,000 personnel. Last year, the OEM’s parts purchasing from 713 suppliers across North America exceeded $26 billion.