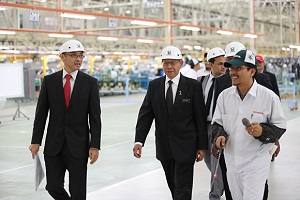 Malaysia – The opening of Line 2 will double capacity to 100,000 units per year, with daily production increasing to 400 units. Honda has invested RM382m (£69m) in the new line, which has a built-up area of 49,190m2. The investment covers equipment and facilities as well as the building itself.

New technologies installed on Line 2 at Pegoh Plant in Malacca include an automated smart welding machine and a modern paintshop with spray robots and under-body coating. There is also an enhanced multi-driving tester for vehicle quality.

Honda Malaysia will now be able to assemble more vehicles for the growing domestic market, and aims to maintain their affordability by boosting the local content from 30-40% to over 70% in the near future. Pegoh currently assembles the City, Civic, CR-V, Accord, Jazz Petrol and Jazz Hybrid. Lines 1 and 2 are both capable of assembling multiple models by efficiently shifting production. As a result of the expansion, Honda Malaysia expects to employ 700 new workers.