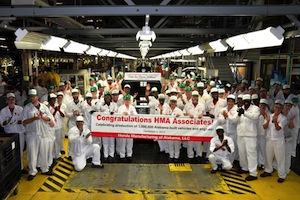 US – The OEM’s new, $71.4m engine facility is supplying V6 units for the Honda Odyssey minivans, Pilot SUVs and Acura MDX luxury SUVs made at Lincoln, Alabama. Its more highly automated assembly process is being hailed by the vehicle-maker as “a breakthrough for Honda engine production in North America”.

The automation covers a range of parts handling and installation within the 186,000 sq.ft facility. Included on the assembly line is a robotic station which can assemble more than 9,000 pistons per day, with a cycle time of six seconds per unit. There is also a fully automated piston installation process – a first for Honda worldwide. The 92 advanced robots and 250 personnel, in two shifts, are producing 1,500 engines per day.

“Our new automated engine assembly line is the most advanced facility of its kind at any Honda operation across the globe – and it's right here in Lincoln, Alabama,” said Jeff Tomko, president, Honda Manufacturing of Alabama (HMA).

HMA has the capacity for 340,000 vehicles and engines per year, employing more than 4,000 staff at its 3.7m sq.ft Lincoln plant. It is the sole production source for the Odyssey, the Pilot and the Acura MDX, plus their V6 engines. Since the start of production in November 2011, HMA has turned out more than 3.4 units. The Ridgeline will join the line-up in early 2016.

Over the past three years, HMA has invested over $510m and increased its workforce by 450, in order to enhance manufacturing flexibility and boost production.