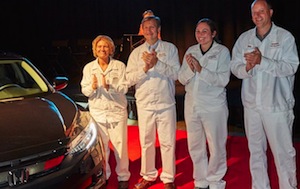 US – Production began at the OEM’s Greenburg plant in Indiana, ahead of deliveries in November. Honda claims the 10th-generation Civic sedan is the “most ambitious” in the 43-year history of the model, of which it has sold more than 10.2m in the US. Nearly 4.5m Civics have been manufactured in the country, and over 9m in North America since 1986.

Honda Manufacturing of Indiana (HMIN) began production in Indiana in 2008, where it has now made more than 1.05m Civics. The Greenburg plant has received investment of around $97m over the last three years in order to implement new production processes and technologies to enhance the quality and delivery of its output. The Civic is also built at Alliston, Ontario, in Canada, while the new turbo engine is made exclusively at the Honda engine plant at Anna, Ohio.

According to its manufacturer, the Civic sedan is the first in a series of new vehicles which will comprise the “most diverse and innovative line-up” in the model’s existence: a sedan, a coupe, high-performance Si models, a five-door hatchback and the first Civic Type-R model for the North American market.