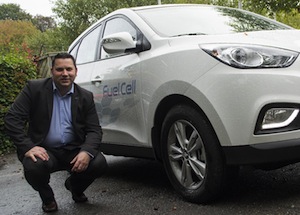 UK – In the newly created position, Robin Hayles will develop and deliver Hyundai Motor UK’s fuel cell and sustainable fuels strategy. Hayles has worked for the OEM since 2004.

In his most recent role as product manager for ix35, Santa Fe, i800 and iLoad, Hayles was responsible for managing the viability study of ix35 Fuel Cell vehicles in the UK, building contacts within the Government and industry bodies.

Commenting on a recent commitment by the Government to develop the refuelling infrastructure for alternative vehicles, he said this news “reaffirms Hyundai’s decision to make the UK one of our most important launch markets”. He stated that the company would “continue to push forward with our plans for large scale deployment of fuel cell electric vehicles in the UK”.

The zero-emissions ix35 fuel cell has a 369-mile range and its maker claims it is as easy to refuel as a conventional vehicle. Hayles said: “ix35 Fuel Cell is the first series production FCEV [fuel cell electric vehicle] on the market and has received significant interest from businesses across the UK.”