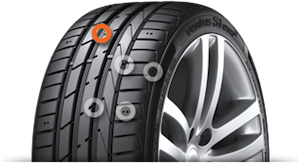 Germany – The first generation of BMW’s premium small car has featured Hankook tyres since 2011, but the 2014 version is now rolling off the assembly lines equipped in similar fashion. Meanwhile, Daimler has selected the company to provide tyres for its new C-Class model.

Mini tyres of 15, 16 and 17 inches, partially with emergency running capabilities, will be delivered directly to the vehicle production sites from Hankook’s factory in Hungary.

Meanwhile, Mercedes-Benz’s C-Class will be equipped with the Ventus S1 evo2 in sizes 225/50 R 17 W in both standard and runflat versions. The medium-sized car will be the third Mercedes-Benz model to feature Hankook tyres, after the S and E-Class.

The Ventus S1 evo2 offers a weight reduction due to the lightweight, durable steel cord material used for its belt package technology. Additionally, the rubber reduces heat development during driving, as it is manufactured with extended mixing periods at lower temperatures that result in an increased compounding rate in the tread surface area and a more targeted cross-linkage between the carbon black and rubber molecules. Meanwhile, a specially developed styrene-polymer increases the grip.