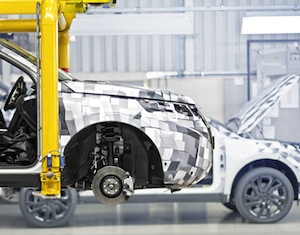 UK – The additional work will require an extra 250 personnel at the plant, boosting its workforce to 4,750. Halewood has received an investment of £200m to support the introduction of the new Land Rover model, which will go on sale in 2015.

The facility has been upgraded with a £45m servo press line from Aida, installed in March this year, plus 260 robots, new laser welding capabilities and the latest equipment monitoring and reporting systems. Halewood has received a total investment of nearly £500m over the past four years and in 2011 began producing the Range Rover Evoque, which has become JLR’s top-selling model; within two years, the plant hit a JLR record of 200,000 vehicles on a single line.

“In many ways, Halewood has embodied the transformation of Jaguar Land Rover,” commented Richard Else, JLR Halewood operations director. “We have seen our workforce treble and production quadruple in just four years. Today we are operating three shifts, 24-hours a day to meet global demand and I am confident that the team will rise to the challenge and deliver a flawless launch of this exciting new model.”