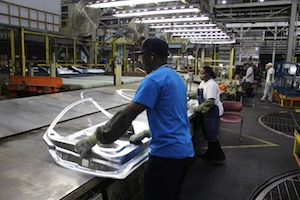 US – The investment at the two facilities is to prepare for a future vehicle programme, and forms part of a $300m expenditure planned by GM for its operations in Michigan. Orion Assembly will receive $160m for tooling and equipment, while Pontiac Metal Center will get $40m for new dies.

Cathy Clegg, vice-president GM North America Manufacturing, described the announcement as “a shot in the arm” for Orion and Pontiac. However, no new jobs will be created by the investment.