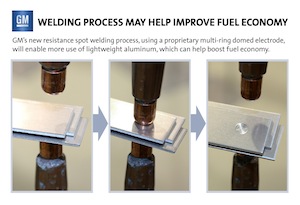 US – The vehicle-maker has protected the industry-first technique it uses for the 2014 Corvette Stingray as one of 1,672 patents the company acquired in 2013. GM noted that, according to figures from The Patent Board, this was 176 more than second-placed Toyota and over twice as many as Ford.

The Corvette Stingray involves 354 spot-welds which eliminate nearly 2lbs of rivets. The welding process uses a multi-ring domed electrode head to conduct an electrical current that creates intense heat, disrupting the oxide on sheet, extruded and cast aluminium surfaces. The result is a strong weld.

Another new technology patented by GM is a lightweight shape memory alloy wire, which replaces a heavier motorised actuator that opens and closes the Stingray’s hatch vent, releasing air from the trunk and enabling its lid to close more easily than on previous models.

The Patent Board also named GM “No.1 in Technology Strength”.