GM output hits half a billion 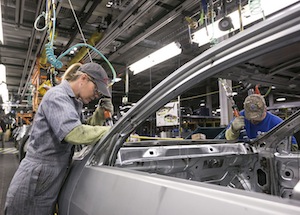 US – The milestone was celebrated at Fairfax Assembly Plant, Kansas, after 106 years of vehicle production. The OEM also announced an investment of $174m at the facility for new equipment and technology to support production of the 2016 Chevrolet Malibu, which will begin later this year.

The ninth-generation Malibu will feature a lighter curb weight and a hybrid powertrain which shares Chevrolet’s Voltec technology and will help to deliver a combined fuel economy of 48 mpg, according to GM. A new ‘shake and rattle’ booth at Fairfax will simulate all road conditions and enable the elimination of noise sources in the new model.

GM CEO Mary Barra suggested that output would continue to increase: “During 2015, we expect to sell more than 1,000 new vehicles per hour, 24 hours per day. This adds up to nearly 10m vehicles, the most in our history.”

The vehicle-maker recently announced an investment of $5.4 billion over three years to build next-generation vehicles, including $783.5m for three facilities in Michigan and the $174m for Fairfax.