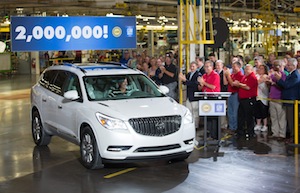 US – A 2016 Buick Enclave was the milestone vehicle which rolled off the production line at the OEM’s newest plant in North America. GM now has a cumulative total of 500m units worldwide, more than any other manufacturer.

Commenting on the milestone, Lansing regional plant manager Mike Trevorrow said: “This team has established a strong foundation since opening to enable us to produce our 2 millionth vehicle in nine years, which is quite an accomplishment.”

Lansing Delta Township Assembly was opened in 2006, the first automotive manufacturing facility worldwide to receive Gold certification for Leadership in Energy and Environmental Design. Since the start of production, the plant has produced the Saturn Outlook, Chevrolet Traverse, GMC Acadia, Acadia Denali and Buick Enclave. The first vehicle produced, in May 2006, was a Saturn Outlook.

GM has announced more than $580m of investments at Lansing Delta Township over the past two years, including $63m in 2014 to expand the plant by nearly 263,000 sq.ft and $520m this year for tooling and equipment for future vehicle programmes. The facility is currently operating on three shifts, with around 3,200 workers.

The OEM has another plant in Lansing, Grand River, which opened in 2001.