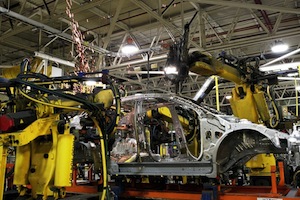 US – Consisting of 8,500 panels, the ground-mounted array will be the OEM’s largest solar installation in the Western Hemisphere. The project will be completed by the end of 2014.

The renewable energy produced by the array will power almost 1.5% of the plant, which produces the Chevrolet Cruze; this will save 1,993 tons of CO2. The OEM previously installed a 1.8MW array at its Toledo transmissions facility, also in Ohio and the largest rooftop installation in the State. With the Lordstown project, GM says it is on track to achieve its goal of deploying 125MW of renewable energy around the world by 2015.

“With more solar installations than any other automotive company and the second-highest percentage of solar among all commercial users, GM shows that manufacturing and the use of renewable energy can go hand-in-hand,” commented Rhone Resch, president and CEO of the Solar Energy Industries Association.