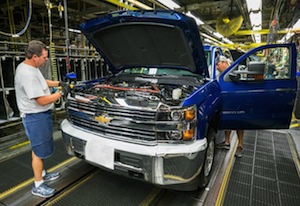 US – The Michigan assembly plant, the OEM’s oldest in North America, will receive $877m to build a new bodyshop close to the Flint Metal Center, which supplies it with sheet metal and other parts to make Chevrolet and GMC full-size pick-up trucks. The investment will also cover upgrades to the general assembly area, retooling and the installation of new equipment.

“This investment will allow us to use a more innovative approach to deliver material between two critical facilities, reducing handling and the time it takes to ship parts,” said Cathy Clegg, GM’s North America Manufacturing and Labour Relations VP.

Since 2011, Flint Assembly has received investment exceeding $1.8 billion, including $600m for plant upgrades and a new standalone paintshop which will use a wet-coat process. The paintshop is currently under construction and due to open in 2016. Work will begin on the 883,000 sq.ft bodyshop in the first half of 2016, with completion scheduled for 2018.

Flint Assembly opened in 1947 during the post-World War Two building boom and has so far made more than 13m vehicles.