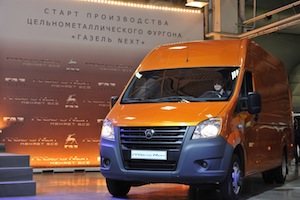 Russia – The OEM has invested 6 billion roubles ($94.4m) to introduce its new model, including significant modernisation of its Nizhny Novgorod plant. With the launch of the GAZelle Next panel van, the company has entered the segment of vans with capacity over 13 cubic metres and will be competing against foreign OEMs in this market.

The upgrade to Nizhny Novgorod involved the development of new stamping, welding, painting and assembly facilities. The automated stamping line is equipped with six-axis Kuka robots and LG equipment. It produces face side panels, underframes, plus sliding and wing doors, with a capacity of six to eight parts per minute.

The new welding line features Fanuc robots with payload capacity of up to 700kg, for the production of side panel underframes, bodies and doors. Each machine performs the changeover autonomously, plus handling, welding, flanging, glueing and sealing operations. The welding line also includes overhead conveyors and automated component delivery systems.

Eisenmann equipped the new paintshop, which treats each van version with a specific paint programme. A track of robots in six axes and all planes ensures the even distribution of paint over the bodies.

Vadim Sorokin, GAZ Group president commented: “From the technical point of view, the new project is the most complex and large-scale project that GAZ Group has been implementing for the last 15 years.” He said the GAZelle Next launch will enable the company to extend its presence not only in Russia and the CIS “but also to develop export programmes”.