As long as people have owned and driven vehicles that are no longer literally powered by horses, they want their car to be protected and to look beautiful. Each layer sprayed on a carbody now has its function exactingly defined by the industry, and thickness and appearance are under strict scrutiny by OEMs. They expect paint suppliers and spraying equipment suppliers to reach increasing levels of efficiency and quality, despite the complexity of the new technologies being used: waterborne paint, primerless, compact process and interior painting robotisation. 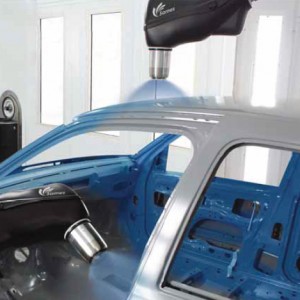 More and more metal to cover
Based in the French Alps, Sames Technologies has been innovating spraying technologies for more than 65 years and is well known in the automotive industry for leading the way in the development of electrostatic spraying bells. As car production is growing globally, from 77 million units last year and predicted to exceed 100 million units before 2018, the surface area of car bodies to protect and beautify is growing too, along with the consumption of paint.

For ecological reasons, as well as for economic reasons, OEMs have to spray only the amount of paint needed, in the right place. This requirement quickly brought robots into paintshops as the best “painters” for their repeatability, 24 hour capability to work in a paintbooth and their ability to handle rotating bell atomizers.

In fact, the painter is no longer handler of the brush, the real painter is now the robot programmer. Thus, the robot became only a tool, an arm for the painter who handles a very special kind of brush: the electrostatic rotary bell atomizer. This kind of atomizer is far removed from a simple spray gun: the liquid paint is spread over a titanium cup turning at 90,000 rpm, to become thousands of droplets at the edge of the cup. The droplets are charged at 80,000 volts and are blown by shroud air to be deposited on the car body or other earthed component (hang-on parts for example). The cup ensures the homogeneity of droplet size (25μm for a metallic base coat).

The electrostatic effect increases the transfer efficiency from 30% for a typical air-fed spray gun, up to 90% for electrostatic. The air shroud makes the pattern totally homogeneous, this is what determines the final quality of the film build.

Technology for saving paint
The company has sold a total of 2,500 atomizers worldwide, and its latest generation of rotating bell atomizers is improving spray efficiency further, thus increasing paintshop efficiency. Transfer efficiency is a key factor of energy consumption for a paintshop: paint that is not transferred to the car is overspray: less overspray means less air to recycle, and the opportunity to use dry scrubber technology.

To fully understand how new technologies can bring great improvements to OEMs’ process in paintshop and quality on cars, let’s introduce two definitions: 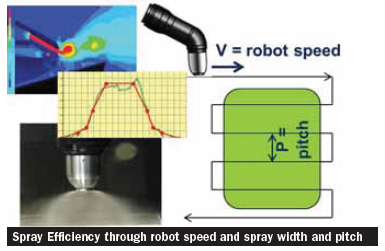 Spraying Efficiency (SE) is a simple value calculated by multiplying the pitch between two paths (P) by the tip speed of the atomizer, which is moved by the robot. With a constant tip speed, the greater the width of the pattern, the greater the SE. The trend of the waterborne compact process raises two major difficulties for OEMs’ paintshops: cleaning issues and shorter cycle time. An automatic cleaning box is the answer to reduce the cleaning downtime as much as possible. Shorter cycle time requires the painting of a greater surface area in a shorter time.

The first answer of a robot manufacturer would be to add more robots to the line. This would also be great for Sames: more robots means more atomizers. But the aim of OEMs is to decrease investment, by decreasing the number of robots. So the best way to have shorter cycle times is to paint more with fewer atomizers, improving the SE. Using latest innovations of bell cup technology, ‘7th range’ atomizers are able to increase both W50 and robot speed with a strong wide pattern, increasing the SE for the desired high quality finish. The advantage for the paintshop is obviously fewer robots doing the same job on a shorter paint line, so giving direct savings on investment, commissioning and running costs.

Success of flexibility
The paint market is broadly shared between two technologies: high solid solvent borne on one side is the strategy of Ford, Fiat and other OEMs in some areas, like Russia, India, the Americas and South East Asia. Water borne is being utilised by VW, Toyota, PSA, Hyundai and German luxury OEMs, in Europe, Japan, and now China. Being able to offer a totally flexible range of atomizers is a must for Sames: able to apply any type of material, on any type of robot requested by customer, as part of any type of process (with differing cycle times, on stop&go conveyors etc), for a greenfield project or brownfield retrofit. Innovation inside is the key to the latest atomizer: the Accubell 709 EVO is a compact internal charge bell with a docking station fixed on the booth wall.

• First phase: a transfer tank, located in the docking station, fast fills with the exact amount of paint, into the tank of the atomizer 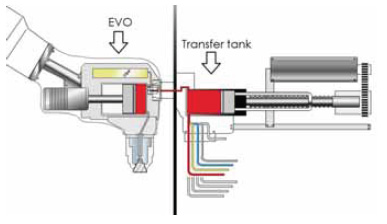 • Second phase: The atomizer sprays, while the transfer tank is preparing the next colour

• The internal charge atomizer gives a strong pattern, compatible with any tip speed, up to 1,000 mm/s

• The internal charge bell repels the overspray, dramatically reducing contamination and the cleaning down time

• The internal charge bell is a smaller tool, ideal for complex cut-in applications.

Sames atomizers are already in global use with every OEM. KIA use hundreds of Sames atomizers in Korea, Honda and Nissan are installing around 100 this year, Subaru and Mobis, an automotive plastic parts supplier, are using the latest technology in the Americas. French OEMs are already very familiar with these products : Renault will soon have their all-new paintshop in Russia using the PPH 707 SB atomizer, a best seller for solvent borne paint. Sames was recently given the 2012 Core Supplier award by the PSA group, for its innovative products and international operations, especially for new paintshops in China; Wuhan for DPCA (Dongfeng - Peugeot Citroën Automobile) and in Shenzhen for CAPSA (Chang’An - PSA), duplicating the compact waterborne process used at the Sochaux, France plant. The 16 global subsidiaries of Sames, shared with its sister company Kremlin Rexson, support OEMs as closely as possible at their facilities, especially in BRICS (Brazil, Russia, India, China and South Africa) where investments in paintshops are focusing for next decade.