Forming in the hot seat 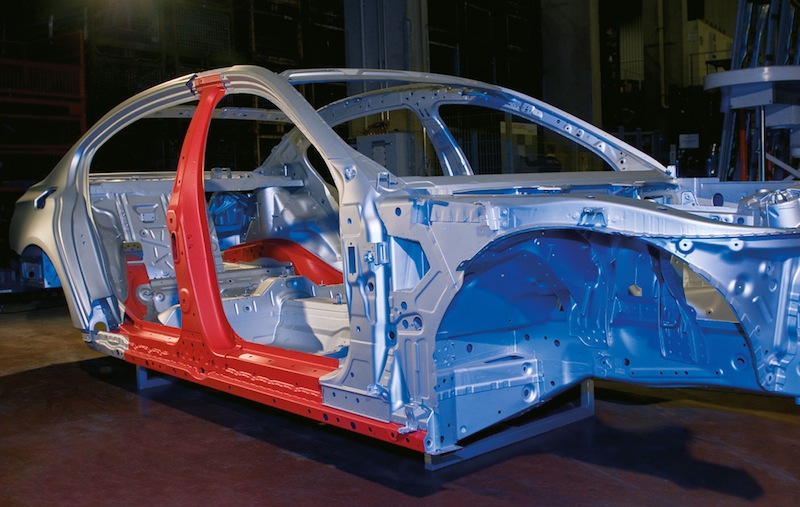 A number of innovations have come to market recently that push press hardening to new levels of performance. Schuler, for instance, has unveiled what it describes as a pressure-controlled hardening process to help improve costs and energy consumption per part. Its PCHflex uses fast presses with force control and ring-valve technology to deliver up to 4m parts per annum (four parts per stroke) on a single line.

By controlling pressure during hardening, the necessary press force can be distributed evenly over the part. The flexible bed cushion ensures, within the part and across several components, a uniformly high contact pressure, resulting in faster cooling – typically half that of conventional techniques. This helps to produce a reliable and optimised metallurgical transformation process.

At the same time, because of the process, users are more independent of die and material fluctuations; different manufacturing tolerances and sheet thicknesses can be compensated for more easily. This reduces scrap as well as downtime and idle losses that would otherwise occur due to the reworking of dies, for instance.

Optimised contact a decisive factor
Importantly, the technology allows existing conventional press-hardening dies to be used on these new lines. And conversely, dies designed for PCHflex are also suitable for conventional lines. Indeed, die technology is at the heart of any successful press hardening set-up. Together with an effective cooling system, optimal contact between active die parts and the sheet metal is a decisive factor for part quality and the output rate of the press-hardening process.

Take the example of multiple part production, where a conventional press-hardening process is often stretched to its limits. Fluctuating sheet-metal tolerances and varying die wear result in increased cooling times and reduced output levels. However, multiple part production is seemingly no problem with PCH technology. As the dies and die functions are separated from each other, there is consistently high contact pressure on all parts. The result: extremely short cooling and cycle times, and high system availability.

PHS-Directform enables the production of ultra-high-strength parts with cathodic corrosion protection using a direct process
A US car manufacturer is among those to have already placed an order for four production lines that will be used to manufacture lightweight parts using PCHflex. In addition, options have been agreed for four further lines that incorporate hydraulic presses, roller hearth ovens, dies, and automation equipment. It is worth noting that Schuler has also released a new model of its Crossbar robot, 4.0H, specifically for use in hot-forming processes.

Direct process for ultra-high-strength parts
Another interesting development to emerge in recent weeks is PHS-Directform from Voestalpine: the direct hot forming of hot-dip galvanised steel strip ready for series production. Over the past few years, Voestalpine has made a name for itself with the production of press-hardened steel parts in hot-dip galvanised steel strip (PHS-Ultraform). However, with the advent of its new innovation, the company is also able to produce ultra-high-strength parts with cathodic corrosion protection using a direct process. In the indirect process, blanks are formed using the conventional cold-forming process and then cut. The cold-formed parts are heated before being hardened and the component geometry fixed.

In the new direct process, the blanks are hot-formed before being given their final geometry and hardened using a cooled tool, all in a single process step with just one forming tool. The key unit here is the pre-cooler, which cools the blanks to around 640°C before press hardening. As well as high cathodic corrosion protection, the resultant body-in-white parts offer strength of around 1,800MPa. The direct process also makes prototypes and smaller batch runs more economical. Notably, the process can be applied in existing hot-forming facilities.

Demand driving innovation
Of course, without orders driving demand, there is no innovation. Among the press shops investing in hot-forming technology recently has been Diversified Tooling Group of Michigan, one of the largest companies of its type in the US. The company’s AP&T line, which was installed in June 2015, is being used to develop and test tools and for pre-production. The line comprises a 1,200-tonne AP&T press, AP&T’s own furnace with feeding equipment (MFF – Multilayer Feeder Furnace) and additional automation for pre-production and low-volume series production. 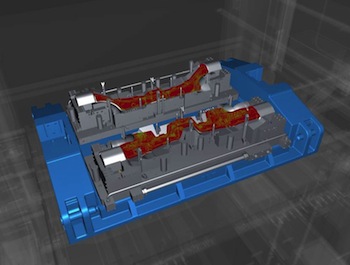 AP and T has installed press hardening lines in the US, Italy and China. Great Wall Motors is a recent client
Of course, there is also plenty of investment in hot forming at the volume end of the market. For example, U.form is investing €30m ($33.4m) at a new plant on the east coast of Italy, where an AP&T press-hardening line will take centre stage. In a separate order from Susta SRL, AP&T will also deliver a press-hardening tool for use on the U.form line. The tool will be designed to produce tailor-welded elements for passive safety, which are press-hardened to obtain specific deformation properties in case of an accident.

Susta SRL’s customers include BMW and Fiat, and it is the latter’s commitment to update the Alfa Romeo brand, specifically the Alfa Romeo 952, that is behind the need for the press-hardened parts at U.form. The system is designed for automatic handling, based on AP&T’s modular concept.

The press line consists of a destacking and centring station; a gas-powered roll furnace; a three-axis, press-loading SpeedFeeder transfer; a standard ODEN-FT press; a three-axis SpeedFeeder transfer for unloading; and a line control system with one main control panel for operating the complete line. The ODEN-FT press is equipped with a high-speed hydraulic system, while the linear automation system will allow for high throughput and good stability. The line, which will be ready for series production by the end of this year, is designed to offer a high degree of flexibility for producing a wide range of automotive parts.

AP&T is also experiencing strong demand from the Far East. For instance, the company has received an order from Nanjing StarQ for a complete press-hardening line for the production of chassis and body parts such as front and rear bumpers, door impact bars and floor tunnels. The line comprises a 1,200-tonne press, which is fully automated with destacking and two SpeedFeeders.

The company also reports that it has delivered a complete production line for press hardening to Great Wall Motors at its new plant in Xushui Baoding. The line is currently used to produce A-pillars and B-pillars, but will make other parts in the near future. At present, the components are used for the Haval H2 and H9 SUVs. The Great Wall line includes a DST destacker for feeding blanks into the furnace, a roller hearth furnace for heating the material, and two SpeedFeeders for feeding into and out of the 800-tonne ODEN press.

Avoiding bottlenecks
On the subject of automation, the unstacking of blanks is one of the key elements that must be designed correctly to avoid bottlenecks in hot-forming installations. For this reason, a US-based customer of Fagor has opted to accompany its press acquisition with a three-axis linear feeder capable of moving weights up to 120kg, ensuring total cycle times, including marking, of just ten seconds.

The integrated roller furnace has a width of 2,200mm so that the workpieces are fed transversely in the direction of feed, ensuring high rates of productivity without excessively increasing the length of the installation. Therefore, only exceptionally long or narrow workpieces reduce the processing capability and, on average, even with a furnace offering a usable length of less than 30 metres, it is assured that this will not become a bottleneck.

The LR5-120-type feeder features four degrees of movement and is capable of transferring and positioning an element quickly and flexibly thanks to its five servo drives. The press itself offers 1,200 tonnes of force, which is important not only for the forming of the parts but also for ensuring a seal with high surface pressure. This will allow faster heat transfer and thus reduce the time required for closure of the die. The table dimensions of 3,000mm x 2,200mm mean that between two and four parts can be processed simultaneously in a single operation.

Last but not least, the growing momentum behind hot tube forming is also worthy of mention. Lanbi, for example, has recently supplied a multi-national manufacturer of shock absorbers with an outer tube bottom hot-forming machine. Here, the end of the tube is heated to 1,000°C and then formed to get the internal specifications for the valve seat. The machine is totally automatic and produces one tube every 11 seconds. Lanbi has manufactured this kind of hot-forming machine for several shock absorber and airbag tube producers in both the US and Europe.

The second-generation TruLaser Cell 8030 from Trumpf is aimed at the laser cutting of 3D hot-formed and press-hardened components. Not only is the new generation more productive and energy efficient than its predecessor, it also has lower investment costs thanks to its modular design and flexible configuration.

The increased productivity of the machine is due primarily to the highly dynamic rotational changer and new rotary indexing table, which features three workstations. The areas for machine loading and unloading are completely separate from each other, facilitating semi-automated solutions. For example, an operator and an optional robot could work simultaneously while the laser cuts the component.

Energy efficiency is also improved via the new TruDisk 2000 with 2kW laser power. The beam quality of the disc laser has doubled to 2mm mrad, and its combination of low power consumption and low investment costs also brings down the cost per part. 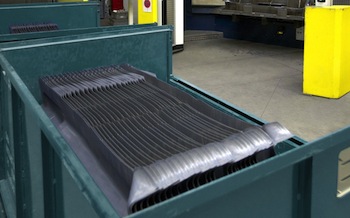 Hujer Lasertechnik of Germany has installed Trumpf TruLaser Cell 8030 technology to make parts such as B-pillars
Among the recent beneficiaries of TruLaser Cell 8030 technology is Hujer Lasertechnik of Harsewinkel, Germany. The company entered a boom period in 2005, when Volkswagen started using hot-formed components on a large scale for the body of its Passat. The advent of press-hardening technology was accompanied by the rapid growth of the 3D laser-cutting industry. According to Trumpf, the reason behind this growth was the fact that, once they have been moulded, hot-formed components are so hard that lasers offer the only way to process them economically.

Today, Hujer produces hot-formed automotive parts in quantities of up to 400,000 per annum. To keep up with cutting demand, the TruLaser Cell 8030 is set work on components such B-pillars. Once the machine is loaded, the rest is done by the machine itself and a robotic assistant. While the operator prepares the next component and the laser cuts the part currently being processed, the robot places the previously cut component in a special frame on the other side of the machine.

This division of labour is made possible by the TruLaser Cell 8030’s most important new feature: its rotary indexing table with three stations. In combination with the high processing speed of the laser, this ensures that, depending on the part in question, the second generation of TruLaser Cell 8030 can get through 600 parts per shift at Hujer Lasertechnik. However, depending on the number of contours, the length of the cut and the associated cutting time, it is theoretically possible for the machine to process as many as 1,350 per shift.

“The process for laser cutting 3D components will become more and more automated,” states Peter Ducat, head of sales and project manager at Hujer. “In my opinion, we’ve not yet exhausted the laser’s full potential – the automotive industry might soon become even more innovative, particularly in terms of material developments.”