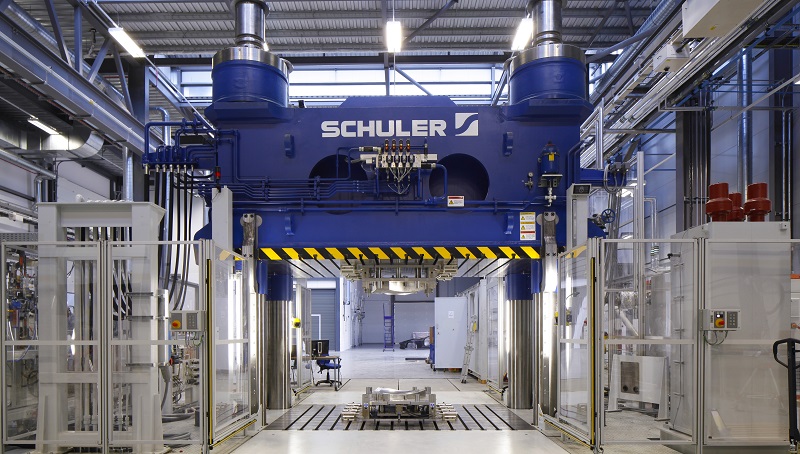 At the end of last year, Toray Industries of Japan announced that its carbon-fibre reinforced thermoplastic (CFRTP) was to be used in an automotive structural application. Claimed to be a world first, the CFRTP material is used in a part called the ‘stack frame’ on the Toyota Mirai fuel-cell vehicle. According to Toyota, the component is designed to protect the fuel-cell stack by absorbing impact from bumps and other road interference. The CFRTP is said to enable a short pressing time, making it suitable for mass production.

As a component, the stack frame highlights the advances being made in the quest for greater composite content in road vehicles. However, Toray is not alone in the vanguard of this technology area. As long ago as 2011, another Japanese company, Teijin, built a four-seater concept car with a CFRTP body structure. The body was formed in a cycle time of less than one minute and weighed only 47kg, just a fifth of a comparable steel structure (typically, carbon fibre has ten times the strength but only a fourth of the weight of steel).

Composite content in the Toyota Mirai
Teijin called its CFRTP press-forming technology 'Sereebo', an acronym for 'Save the Earth, Revolutionary and Evolutionary Carbon', and is currently working with vehicle-makers such as General Motors to accelerate the development of Sereebo-branded composites for mass production of lighter-weight vehicles, the fruits of which are yet to be shared.

Current composite applications
BMW also has a lengthy track record in the adoption of formed composites, notably for electric vehicles such as the i3 and i8. For example, the passenger cell on the i3, named the ‘Life Module’ by BMW, is made from carbon-fibre composites. It is capped by a composite roof made with recycled carbon fibre, and features an interior that incorporates other composites made with natural fibre reinforcements.

On the i8, the carbon-fibre passenger cell offers a two-plus-two seating configuration with excellent crash performance and weight savings of 50% over steel and around 30% over aluminum. The butterfly-style doors are also made out of CFRP and reinforced with aluminum. In addition, the bumpers and fenders are made from a one-piece composite plastic.

It is clear that for the production of lightweight structural components, carmakers are increasingly looking to composites. According to chemical giant BASF, the market for composites in automotive body and chassis applications will be worth €2 billion ($2.3 billion) by 2025. However, thermoset-based composites are expensive and the processes used to turn them into production-ready components have traditionally been too slow for use in high-volume manufacture. Carmakers, research centres and material producers are now looking to develop processes that solve these shortcomings.

Dedicated press solutions
A case in point can be seen at the National Composites Centre (NCC) in Bristol, UK, where a newly installed Schuler press for high-volume manufacturing is now in operation. The upstroking, short-stroke press has a press force of 36,000kN and a clamping surface of 3.6 x 2.4m. “We have installed the world’s largest, openly accessible, high rate manufacturing press for composites,” states Tom Hitchings, NCC business development director. “It is aimed at supporting sectors such as automotive, where developing high-rate, low-cost manufacture of composite components is critical. This press is producing parts within less than five minutes.” 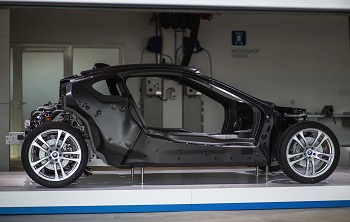 The BMW i8 features a carbon-fibre passenger cell
The NCC uses the high-pressure, resin transfer moulding (HP-RTM) process in which carbon-fibre fabrics are placed in a die, filled with resin and hardened by applying heat and pressure from the press. HP-RTM presses not only enable shorter cycle times for complex parts with high requirements regarding geometry and rigidity, but deliver consistently high part and surface quality. Moreover, the process virtually eliminates voids such as resin-free vacuum pores or gaps within the part or along its edges.

In the HP-RTM process, resin is injected as quickly and smoothly as possible into the vacuum mould, which is opened by just a few tenths of a millimetre. This gap injection process enables the resin to spread over the mat with far less flow resistance and low injection pressure. It then quickly infiltrates the mat before polymerisation is started by heat induction.

Due to the geometry of the part or cavity surface, the die’s centre of loading is not necessarily in the middle of the press. There are also off-centre forces from the injection positions. Importantly, the parallelism control prevents the slide or upper die from tilting during gap injection and thus ensures smooth, even injection over the entire surface.

Conventional downstroking presses work with a fixed bed and moving bolster, and a slide with a press force that is transmitted via cylinders in the press crown. Parallelism is ensured by four servo-controlled, counter-pressure cylinders located at the bed corners. These are also responsible for the break-open force needed to counter the adhesive forces and open the die.

“Although products made with thermosplastic composites can be up to 40% lighter than conventional automotive materials, many OEMs are still not keen”
– Bert Rietman, TPRC

In contrast, the slide on the upstroking press at the NCC only acts as a support during the pressing process. From top dead centre, the slide is moved by a drive cylinder to its support position and locked there. The actual working stroke is performed by the bed plate, driven by several short-stroke cylinders. Parallelism is ensured by a servo controlling these cylinders, while the breakout force in upstroke presses is achieved by the withdrawal of the bed plate. The benefits of upstroking, short-stroke presses compared with downstroking designs include high closing speeds of 1,000mm/s, shorter pressure build-up times of under 0.3 seconds and significantly lower construction height. “When dealing with large thermoplastic composite parts, rapid closing is required to avoid premature cooling,” says Hitchings.

Press equipment testing
Schuler press technology is also at the heart of the Aachen Centre for Integrative Lightweight Production (AZL) in Germany. Here, an upstroking press with a force of 1,800 tonnes is serving as a joint research and development platform for the large-scale testing of dies, lines, components and automation technologies. The tests are conducted under production conditions and ensure that equipment is ready for start-up. Schuler has forged a strategic alliance with AZL especially for this purpose.

For the future development of its press equipment, Schuler is focusing in particular on the areas of high-speed RTM, wet pressing and the processing of thermoplastics; academic and practical feedback from the AZL network is expected to help optimise solutions.

With a bed size of 2,800 by 1,800mm, the Schuler press at AZL will enable the development of processes for the production of real parts with industry-typical dimensions. “For example, we can produce large car-body panels fully automatically,” says AZL’s CEO, Michael Emonts. “Schuler’s composite press gives us the capability to link individual processes into complete process chains and then enhance the part systems correspondingly.”

There is clearly an undercurrent of change in the automotive industry, with composites seemingly on the cusp of making a breakthrough. And if reports from researchers at the ThermoPlastic Composite Research Centre (TPRC) in Enschede, the Netherlands, are anything to go by, it may have already happened.

“Although products made with thermosplastic composites can be up to 40% lighter than conventional automotive materials, many OEMs are still not keen,” says Bert Rietman, business developer at the TPRC. “The experience they have gained processing steel, for example, cannot be wholly transferred to composite processing. Manufacturers are often dependent on their suppliers when it comes to innovations and new technologies. Increasingly, it is these suppliers who are approaching the TPRC.”

In order to come up with the right form and to avoid trial and error as much as possible during the design process, Ulrich Sachs, a University of Twente (UT) doctoral degree candidate, carried out research into understanding thermoplastic composites. Only when designers completely understand the way composites bend, frictionise and slip will it be possible to make completely faultless products. 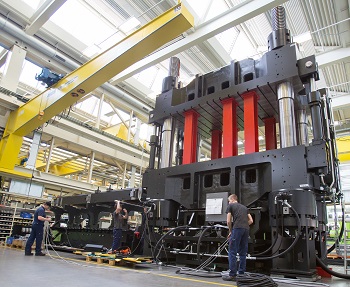 The Open Hybrid Lab Factory will use an Engel V-Duo 3600
The Open Hybrid Lab Factory in Wolfsburg, Germany, which carries out collaborative research for industry and science on the topics of material development, concepts and production technologies for the mass production of hybrid lightweight structural components, is investing heavily in press technology. For instance, an Engel V-Duo 3600 machine is currently being built for this progressive research centre. In fact, Engel is a founder member and sponsor of the centre, which was initiated by Volkswagen in 2012.

Amongst other things, the new Engel machine is intended for the ProVorPlus project, which focuses on functionally integrated process technologies for the pre-assembly of fibre-reinforced plastic/metal hybrids. To ensure that the machine can be deployed with maximum flexibility for various research purposes, it will be fitted with two injection units.

With a clamping force of 36,000kN, the Engel V-Duo 3600 is the largest machine in its series. A machine in the same class for clamping force is installed at BMW’s Landshut factory, where large structural components made from fibre-reinforced plastic composites are manufactured using the HP-RTM process.

Also in the process of supplying a press to the Open Hybrid Lab Factory is another member of the project, Siempelkamp. The 2,500-tonne press will support the forming of fibre/resin ‘organosheets’ as well as the manufacture of fibre-reinforced composites using the RTM and the SMC processes. The press can additionally be used for deep drawing and hot forming of various materials, while another technical highlight is that, by means of a special extruder, the hybrid components can be back-moulded for the manufacture of large, high-strength components. Four cylinders with a pressing capacity of 625 tonnes each allow press speeds of up to 800mm/s, while accuracies in the range ±0.05mm are achievable.

Developing simulation software
"Engineers want to know whether the material will wrinkle during forming, and whether the final product and the manufacturing process will be satisfactory,” says Sachs. “For this reason, the automotive industry requires simulation of new materials and processes, but the software for forming metal currently in use is not suitable for simulating the behaviour of thermoplastic composites. This means that totally new software is needed."

In order to be able to predict distortions during the press-forming process for thermoplastic composites, the TPRC uses AniForm Suite software, developed by AniForm Engineering, a UT spin-off company. The simulation software makes it possible to evaluate whether a product can be manufactured at an early stage in the design process, and helps to gain a better understanding of the way a particular composite material behaves.

Elsewhere, ESI Group is another software developer with a vested interest in forming these advanced materials. Specifically, PAM-Form software is a numerical simulation application dedicated to the manufacture of composite parts. Developed through partnerships in fields including automotive, PAM-Form is a virtual manufacturing solution said to enable realistic and predictive forming and pre-forming simulation of laminated composites, allowing engineers to select the most appropriate material, the right tooling design and the optimum process parameters. The software allows engineers to predict manufacturing defects, including wrinkling, excessive shearing, bridging or inappropriate thickness distribution; and to correct them by modifying the process parameters or the tooling. 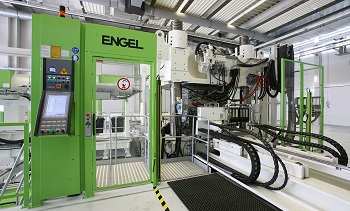 Engel V-Duo technology facilitates composites production
ESI Group has links with the University of Nottingham in the UK, where active support helps to boost software development based on research projects. In fact, the UK is a hotbed of composites study. For example, the Automotive Composites Research Centre (ACRC) at the University of Warwick is a dedicated 380 sq.m facility within WMG's International Manufacturing Centre.