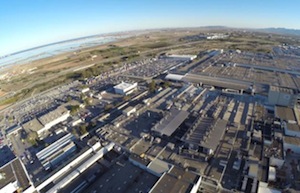 Spain – An initial $1.25 billion was announced in 2011, followed by a further $1.37 billion since 2013. The OEM says that Valencia is now one of the “most advanced, flexible and productive” automotive plants worldwide, and will be the sole European source for all six Ford nameplates assembled there.

A new, 89,000 sq.m bodyshop constructed over the course of eight months will raise the plant’s daily output to 2,000 vehicles. Retooling will enable production of the Mondeo and Mondeo Hybrid using hydro-formed high-strength steel. Over 900 robots now operate in the bodyshops at Valencia.

An extra paintshop has also been built, featuring automated processes which remove the need for drying between paint applications, plus dirt detection technology. This will improve quality, energy use and productivity.

In assembly, new processes have been implemented to accommodate a more complex model mix than any other Ford facility in Europe. In line with the Ford Production System, all components will now be transported alongside the vehicle in a pre-assembled kit. There are now 34 robots in the final assembly area.

As a result of the upgrade, Valencia will increase its output this year by about 40% to 400,000 vehicles; it will have the capacity to build up to 450,000 per annum. The plant now employs 8,000 personnel, up from just under 5,000 in early 2013, while suppliers supporting the operation have increased their employment by 1,500. Furthermore, the number of parts handled at the facility will increase from 7,000 to 18,000 with production of the Mondeo, S-MAX and Galaxy.