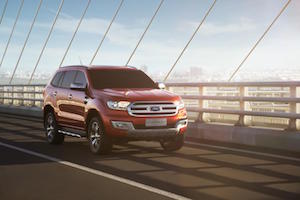 South Africa – The OEM is investing 2.5 billion rand ($163.9m) to expand operations at its Silverton plant to manufacture the new model from the third quarter of 2016, and to increase output of the Ford Ranger launched in September 2015. Ranger production has been running at maximum capacity, says Ford, after sales rose by 18.1% to a record level of 33,920 last year.

The Silverton plant is equipped with the latest automation technology and follows Ford’s global manufacturing processes. It will now be fitted to produce 10,000 body-on-frame Everest SUVs each year. The OEM estimates that its investment will create 1,200 new jobs at Ford South Africa and within the regional supplier network.

Jeff Nemeth, president and CEO of Ford Motor Company Sub-Saharan Africa Region, added that demand for the new Everest, currently imported from Thailand, has been “far outstripping supply”. He said: “This crucial investment will enable us to increase volumes and expand the Everest range to eight derivatives across a broader price range.”

The Everest is currently available in South Africa with a locally produced 3.2-litre, five-cylinder Duratorq TDCi engine, in automatic format with XLT or Limited specifications. With the start of Everest production at Silverton, a 2.2-litre Duratorq TDCi, four-cylinder diesel engine will be added, along with a wider range of specification levels.

Ford previously announced an investment of 3.4 billion rand in 2008 ahead of Ranger production, for the upgrade of Silverton and its other South African facility, the Struandale plant which makes Duratorq TDCi engines. Some Ranger output goes to the local market; the rest is exported to 148 countries in Africa, the Middle East and Europe. Engines and machined components are supplied to Argentina, Thailand, North America, India and China. Exports of the Everest will focus on the Sub-Saharan region.

Ford created its newest business unit, for 67 markets in the Middle East and Africa, in 2014. The following year, it announced the assembly of the Ford Ranger in Nigeria, using semi-knocked-down kits from South Africa. In producing the Everest, the Silverton plant will join AutoAlliance Thailand at Rayong, Ford Chennai in India (under the Endeavor name) and the JMC Xiolan Plant in Nanchang, China.corporate.ford.com