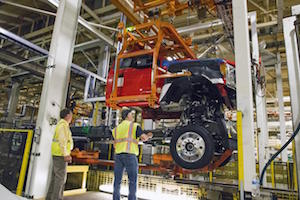 US – The investment is divided into $1.4 billion for Livonia Transmission, Michigan, and $200m for Ohio Assembly Plant. The former will build a new, ten-speed transmission which will be introduced first in the new F-150 Raptor and certain other F-150 models. The investment at the latter will support production of Super Duty chassis.

The fresh funds for the two plants are part of the $9 billion commitment made as part of the 2015 UAW-Ford collective bargaining agreement to continue investing in US manufacturing operations. Over the past five years, the OEM has invested $12 billion and created almost 28,000 jobs. Ford has pledged its commitment to 8,500 hourly jobs over the next four years, across Michigan, Illinois, Kentucky, Missouri, New York and Ohio. Livonia will create or retain 500 hourly positions, while the number at Ohio will be 150.

“We are proud that Ford employs more hourly workers and builds more vehicles in the United States than any other automaker,” said Joe Hinrichs, Ford president, The Americas. “We are committed to manufacturing in the United States, as we have been for more than 100 years.” The company has, however, recently announced the construction of a small-car plant at San Luis Potosí in Mexico, at a cost of $1.6 billion.

Ohio employs over 1,650 people in the manufacture of the following models: the F-350, F-450 and F-550 Super Duty chassis cab configurations, starting earlier this year; and the F-650 and F-750, insourced from Mexico in 2015; and the Ford E-Series cutaway vans and stripped chassis.